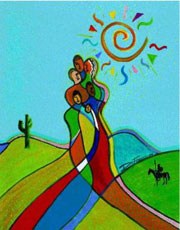 By Barry Abisch
Provided by WorldNow

It is not by accident that the month starts on the 15th day of September, rather than, more conventionally, on the first. Sept. 15 is independence day in five Spanish-speaking nations: Costa Rica, El Salvador, Guatemala, Honduras and Nicaragua. (Mexico and Chile also celebrate the anniversaries of their independence from Spain during this month, on Sept. 16 and Sept. 18, respectively.)

When Hispanic Heritage Week was initiated in 1968, Congress required that the week would always include Sept. 15. Twenty years later, when the commemoration was expanded to a full month, the dates were fixed as Sept. 15 - Oct. 15 to help fix attention on an important date in the history of Hispanic America.

President Lyndon Johnson proclaimed the first Hispanic Heritage Week at a time when migration from Central and South America was beginning to expand. Yet, there have been Spanish-speaking people in what now is the United States for almost 500 years, ever since California, Florida and the Mississippi River were "discovered" by Spanish explorers in the early 1500s.

Although Spain was unable to establish enduring colonies in North America, the early attempts at exploration and settlement did have a lasting impact. Researcher Robert Suro, writing on the facts.com Web site, says that some 30 percent of today's Hispanic-Americans can trace their ancestry to forebears who lived in Texas, New Mexico and California, among other places, when those states were territories.

But the majority of Hispanic-Americans arrived in the U.S. more lately, though it is only in the last quarter-century that the U.S. Census Bureau has tracked that migration. In 1930, the Census Bureau added "Mexican" among the ethnic origins it included in the national headcount. In 1940, a category for "persons of Spanish mother tongue" was added to Census forms. In 1980, the description was broadened again, to "Spanish/Hispanic" origin.

No matter how Hispanic-Americans are categorized by the Census Bureaus, it is evident that Hispanic Heritage Month celebrates a growing segment of the American population and culture. Today, there are more Hispanics in the United States than there are in Spain. Mexico and Colombia are the only nations with larger Hispanic populations than the U.S.

During a single year, from July 1, 2005 to July 1, 2006, the Hispanic population added 1.4 million people, accounting for half of the total increase in population during that period. By the years 2050, the Census Bureau predicts, Hispanics will represent one-fourth of the U.S. population.

It is the growing place of Hispanics in American culture and community which Hispanic Heritage Month commemorates.

In 1989, the year the commemoration was expanded from one week to a full month, President George H. W. Bush said "Perhaps no single ethnic group has had as profound an impact upon our Nation as Hispanic American ... Mexican Americans, Cuban Americans, Puerto Rican Americans and other men and women of Hispanic descent have not only demonstrated the power of individual enterprise but also added to the cultural diversity that so enriches American life.'