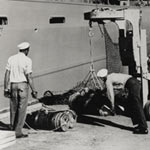 Adapted from an article by the National Park Service

The national memorial at the Port Chicago Naval Magazine recalls the largest homeland disaster of World War II and helps tell the story of the segregated military that fought that war.

At about 10:20 p.m. on July 17, 1944, the loading dock at Port Chicago Naval Magazine near the San Francisco Bay in California went up in a colossal blast of some 5,000 tons of explosives.  A pillar of fire and smoke stretched over two miles into the sky above Port Chicago and the seismic shock wave was felt as far away as Boulder City, Nevada. The air filled with the sharp cracks and dull thuds of smoldering metal and unexploded shells as they showered back to earth as far as two miles away..

African-American sailors were assigned to Port Chicago, under the command of white officers in accordance with the Navy's segregation policies. Three hundred and twenty men on duty were killed and nearly 400 wounded. Of the 320 men killed in the explosion, 202 were African American enlisted men. The explosion at Port Chicago accounted for 15 percent of all African-American casualties of World War II.

After an accident of this magnitude, it is customary for the Navy to grant 30-day survivors' leave for visitation of family. The white officers received a break, but no leave was granted for the any of the black sailors.

On August 9, three weeks after the blast, the men were back in formation marching towards the docks. A survivor remembers, "I was marching on the left-hand side of the ranks. When the lieutenant gave the command. 'Column left,' everybody stopped dead, boom, just like that. He said, 'Forward march - column left!' Nobody moved."

More than two-thirds of the men refused to return to work even after being threatened with imprisonment.  When the men were warned that mutiny during war carries a death sentence,  most ended their protest. But 50 sailors still refused to return to their jobs, citing the dangerous conditions that led to the deadly explosion.

Meanwhile, of the 125 witnesses called to testify at an inquest into the cause of the explosion, only six were black. Not of the prisoners was included among the six.

The 50 seamen who refused to return to duty were court martialed in September of 1944. They were tried by seven white  Navy officers, and were convicted after only 80 minutes of deliberation. They were dishonorably discharged and sentenced to terms of 8 to 15 years in jail. Most of the men were released from the brig at the end of the war, but were denied veterans benefits. Finally, in 1999, President Bill Clinton pardoned Freddie Meeks, one of few remaining survivors of the group of 50.

The Port Chicago incident was one of the factors that led President Harry S Truman to end segregation in the military in 1948.