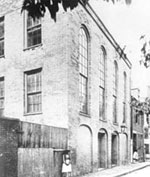 Adapted from information provided by the National Park Service

The Black Heritage Trail on the north slope of Boston's Beacon Hill pieces together the story of the free African American community that lived here during the decades leading up to and during the Civil War. These historic buildings were the homes, businesses, schools, and churches of this thriving black community that, in the face of great opposition, fought the forces of slavery and inequality.

Here are some of the features along the trail:

The Robert Gould Shaw Memorial was built in 1897 in honor of the Massachusetts 54th Regiment, the first all-Black regiment recruited in the North to fight for the Union army during the Civil War.

George Middleton was an early leader of the African-American community on Beacon Hill and was a soldier in the Revolutionary War. Middleton lived at numbers 5 - 7 Pinckney Street after the Revolutionary War. Built in 1797, the George Middleton House is the oldest standing wooden structure on Beacon Hill. It can be viewed from the outside, but is privately owned and not open to visitors.

The Phillips School, which opened in 1824, was considered the best of Beacon Hill's seven white public schools, and stood in contrast to the Abiel Smith School, the first public school in America built to educate black children. The two schools were the focus of school integration battles in Boston during the 1840s and '50s.

John J. Smith operated a popular barber shop that became a meeting place for abolitionists and hiding place for fugitive slaves. Smith went on to become a state legislator. The John J. Smith House, where he moved after the Civil War, is on the Heritage Trail but is not open to the public.

Built in 1807 and site of the Third Baptist Church in Boston, the Charles Street Meeting House was at the center of the city's early attempts to desegregate churches in the early nineteenth century.

The Lewis and Harriet Hayden House was a station on the Underground Railroad. Lewis Hayden escaped from slavery in Kentucky and moved to Boston, where he became a militant abolitionist.

Built in 1843, the John Coburn House was the site of a gaming house that was one of the most profitable black-owned businesses in Boston. Coburn used the fortune he earned to provide financial support to various abolitionist groups in the community.

As the 19th Century century progressed,  a few prominent members of the African-American middle-class began to purchase property from White landowners. The five houses on Beacon Hill's Smith Court are some of the last structures still standing that African-Americans called home for almost a century.

The oldest extant black church building in America, the African Meeting House was built in 1806 by a group of black Baptists who were forced to leave local White churches because of racial discrimination.