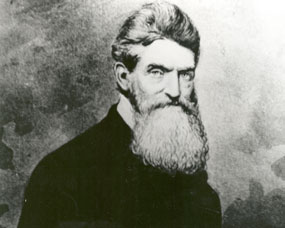 Brown had come to arm an uprising of slaves.

Instead, the raid drew militia companies and federal troops from Maryland, Virginia, and the District of Columbia. On the morning of October 18, a storming party of 12 Marines broke down the door of the Armory's fire enginehouse, taking Brown and the remaining raiders captive.

The firehouse -- which became known as "John Brown's Fort" -- has been moved several times, and now rests at the Harpers Ferry Historic Site, across the street from its original location.

Brown, charged for "conspiring with slaves to commit treason and murder," was tried, convicted, and hanged in Charles Town on Dec. 2, 1859. Before the sentence was carried out, however, Brown issued a prophetic warning:

I wish to say furthermore, that you had better - all you people at the South - prepare yourselves for a settlement of that question that must come up for settlement sooner than you are prepared for it. The sooner you are prepared the better. You may dispose of me very easily; I am nearly disposed of now; but this question is still to be settled - this negro question I mean - the end of that is not yet.

John Brown's Raid remains part of the legacy of our nation's struggle with slavery.

But Brown is not the only historic figure to pass through Harpers Ferry. Among the others are
George Washington, Thomas Jefferson, Meriwether Lewis,  "Stonewall" Jackson, Abraham Lincoln, and Frederick Douglass.