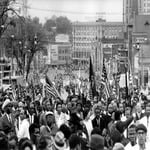 The Selma to Montgomery National Historic Trail was established by Congress in 1996, to commemorate the events, people, and route of the 1965 Voting Rights March in Alabama. The March route is a component of the National Trails System, and is administered by the National Park Service (NPS). The route is also designated as a National Scenic Byway/All-American Road, awarded by the U.S. Department of Transportation (DOT). Additionally, the Federal Highway Administration (FHWA) is a key partner in interpreting and protecting this historic route; with the majority of project funding provided through the Scenic Byways Program.

The 54-mile trail follows the historic voting rights march by beginning at the Brown Chapel A.M.E. Church in Selma, and crossing the Edmond Pettus Bridge. On March 7, 1965, as non-violent marchers crossed the bridge, they were tear- gassed, beaten, and their processional stopped by law enforcement officers. This display of violence, heaped upon non-violent protesters was captured by the news media and broadcasted worldwide. This event came to be known as "Bloody Sunday." Outraged protesters from across the country joined the marchers for a subsequent five-day march that began in Selma on March 21, 1965, this time with state and federal law enforcement protection.

The marchers traveled along U.S. Highway 80 in Dallas County, continued through Lowndes County and Montgomery County, and ended the five day trek at the Alabama State Capitol in Montgomery. The Southern Christian leadership Conference (SCLC) and the Student Nonviolent Coordinating Committee (SNCC) organized the logistics for the march-providing food, water, sanitation, and other services for the marchers, who camped out along the way. Twenty-five thousand marchers concluded the historic march in Montgomery on March 25th with many notable speakers who addressed the crowd at a concluding rally near the capitol building. Dr. Martin Luther King, Jr. delivered one of his most notable speeches at the rally. As a result of this historic event, the Voting Rights Act was passed on May 26, 1965.

Historians view the 1965 Selma to Montgomery Voting Rights March as one of the last great grassroot campaigns for human rights and the summit of the modern civil rights movement that originated in the 1950s. The March and complimentary events brought the issues associated with voting rights to the forefront of the United States political agenda and raised the nation's consciousness about the struggle of African-Americans for equal rights.

PURPOSE OF THE TRAIL

The Purpose of the Selma to Montgomery Trail is that of the following: