The Story of Black History Month

The Story of Black History Month 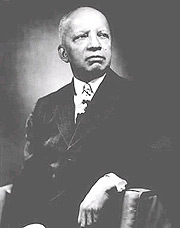 Black History Month can be traced back to Carter G. Woodson. (©NRCS.gov)

When he conceived of the Association for the Study of Negro Life and History in 1915, Carter G. Woodson believed that publishing scientific history about the black race would produce facts that would prove to the world that Africa and its people had played a crucial role in the development of civilization.

As a Harvard-trained historian, Woodson, like W. E. B. Du Bois before him, believed that the truth could not be denied and that reason would prevail over prejudice. He thus established a scholarly journal, The Journal of Negro History, a year after he formed the Association. Scientific history would counter racial falsehoods, and the community of white scholars would alter its view of the black race, and the race problem would gradually disappear.

A decade into his labors, Woodson began to think differently about the inherent power of scholarship, the importance of the scholarly community in promoting the truth, and the place of the community in the Association's mission. Scholarship had not transformed race relations. Most white historians had not come to recognize the truth when it was placed before them. Additionally, he had come to understand that some of the people who needed convincing the most were his own people! Hence forth, the Association would spread the news about Black history to the general public as well as scholars.

Conceived in 1925 and first celebrated in 1926, Negro History Week represented a rethinking of the Association and how to carry out its mission. No longer would it be simply and solely an organization of scholars dedicated to the production of knowledge. Now it would be an organization dedicated to discovering and  popularizing the truth. The Association had to re-educate blacks as well as whites, and its doors had to be opened to all interested in history, not just historians and other scholars.

When the Association announced Negro History Week for 1926, Woodson was overwhelmed by the response. Black history clubs sprang up, teachers demanded materials to instruct their pupils, and progressive whites, not simply white scholars and philanthropists, stepped forward to endorse the effort. Woodson and the Association scrambled to meet the demands of public history. For teachers, the Association published photographs and portraits of important black people. It published plays to dramatize black history. To serve the desire of history buffs to participate in the re-education of black folks, ASNLH formed branches to bring them into the organization.

The Association, the center of the study of Black life and history, underwent its own changes, including a recognition of the need to devote more time to Black History. In 1976, fifty years after the first celebration, the Association held the first Black History Month. By this time, the entire nation had come to recognize the importance of Black history in the drama of the American story. Since then all American presidents, Republicans and Democrats alike, have issued Black History Month proclamations.

In keeping with tradition, the Association, now known as the Association for the Study of African American Life and History, believes that Black history, like American history, should be studied 365 days a year. Yet as the Founders of Black History Month, ASALH continues to view February as the critical month for carrying forth the mission.