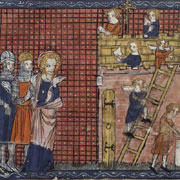 Legend has it that Valentine was a priest in Rome, under the reign of Emperor Claudius II . Claudius ordered young, single Roman soldiers not to become engaged or get married. He believed that wives and families served as distractions to his soldiers and would not fight as well as unmarried men. Valentine defied the decree and secretly performed marriage rituals for young couples. Valentine was eventually arrested, imprisoned and ordered to be put to death.

While in prison in Rome, legend has it that Valentine wrote a letter to his sweetheart, which he signed "From your Valentine," an expression still in use today. Valentine was beheaded on February 14th .

The actual holiday of Valentine's Day derives its origins from the ancient Roman feast of Lupercalia -- a spring fertility festival celebrated on February 15. On the eve of the festival, the names of the young Roman girls were written on slips of paper and placed into jars. Each young unmarried man drew a slip with a name on it. This girl was chosen was to be his sweetheart for the year. Many of the young couples were later married.

This festival was later outlawed because the annual pairings were considered "un-Christian." It is believed that the Christian church decided to celebrate Valentine's Day on February 14th in an attempt to disassociate with the pagan Lupercalia festival.