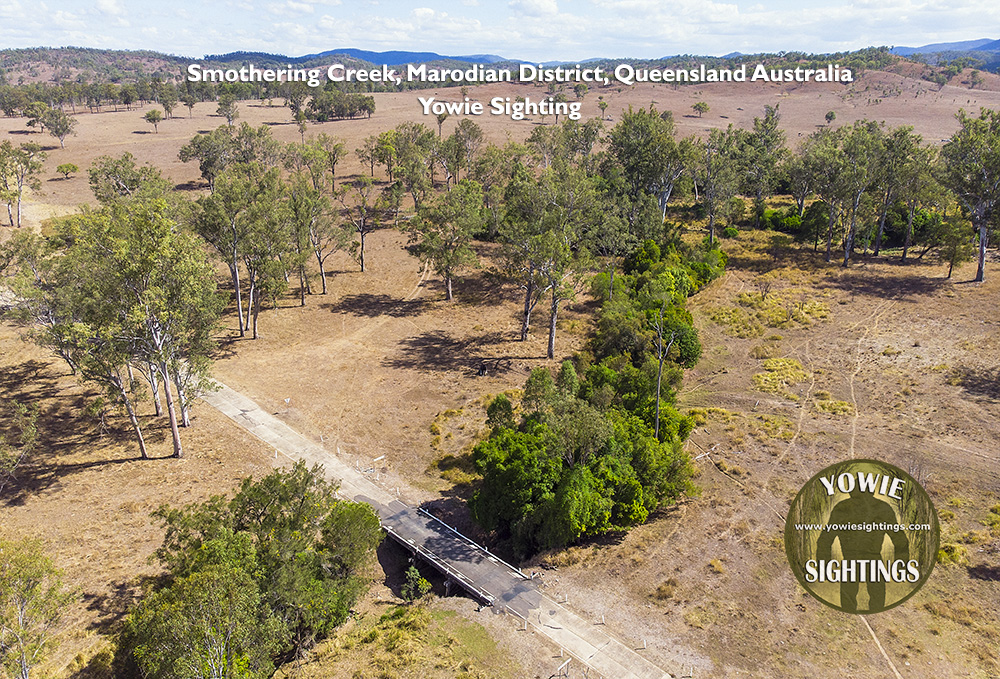 Three motorcyclists. Ian a veterinarian, Michael and David both ex-military, on a tour through the Burnett region flee from their campsite after encountering two Yowies (Australian Bigfoot). This Yowie sighting September 2020 as told by Ian

I had been planning to do a motorcycle trip across India with my two best mates who had retired from the military. We had got to the stage of having our bikes all kitted out and were in the process of organizing their transportation to India when the covid crisis hit and locked down international travel. We were so disappointed that our plans had been dashed. David came up with a plan to do a mini-tour somewhere in QLD which we all jumped on board with and we decided on a route through the Burnett region and back to Brisbane. 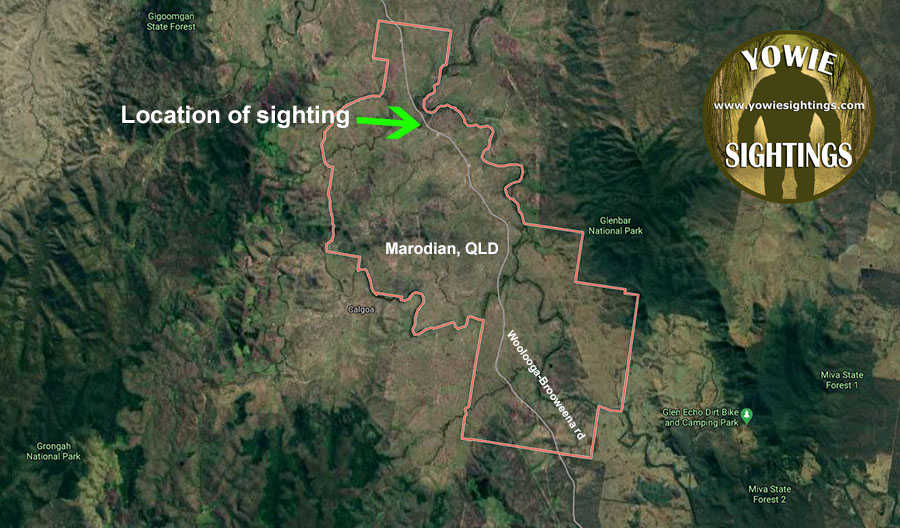 We had reached the township of Biggenden in the mid-afternoon and after a short break, we decided to travel on and find a place to camp for the night and found a nice location beside a small creek on the Brooweena-Woolooga rd where we set up our tents. Once we had our tents set up we had a look around. It was a really great spot to camp with big mature gum trees towering over a fairly clear area of grazing land for cattle which was bordered on one side by a bushy creek. We found a trail to a causeway across the creek which was basically dry except for a few small pools of water. We became aware of a really foul smell which I thought was the odour from a dead animal but it wasn’t quite right. I work as a veterinarian and I have smelt all sorts of dead animals and this was different somehow but I didn’t give it a second thought. We walked back across the causeway to our tents and made some dinner on a portable stove. 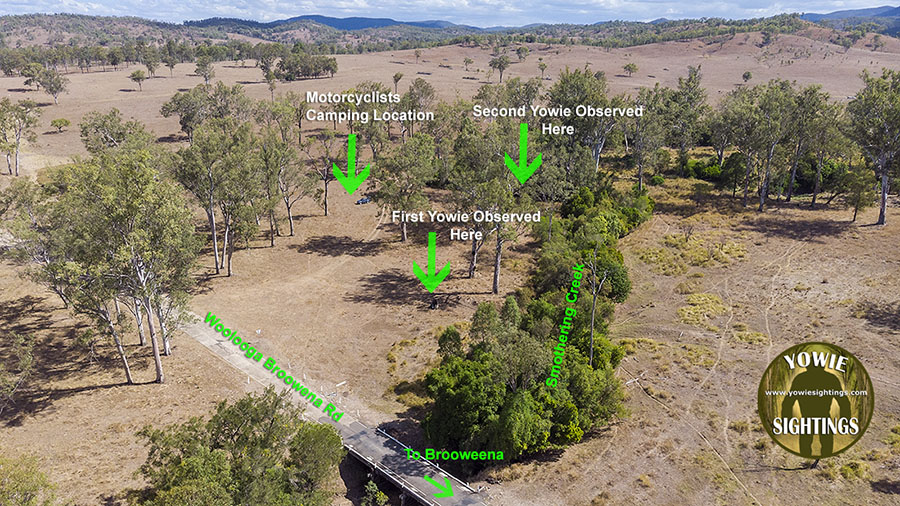 It was quite cool as darkness fell and we sat around for several hours chatting while we ate dinner which was some tinned braised steak and onions and bread. We all turned in for the night around 10 pm planning to leave at daybreak.

I awoke suddenly at one point and could hear some movement around the tents and in my sleepy haze I thought is must be one of the other guys out to relieve himself and I rolled over to go back to sleep. I snapped awake again when I heard the stove fall over and I reached for my torch, climbed out of my sleeping bag to look out at what had happened. My first thoughts were that one of the guys had tripped over in the dark but when I shone the torch at the stove which had been knocked of its metal stand, both were laying on the ground but no sign of either of the guys. I was trying to work out what had happened and scanned the torchlight around and couldn’t see a thing but just as I retreated back into my tenet and about to zip up I heard some strange clicking sounds out in the darkness and shone the torch out again. In a split second, I was absolutely startled as the torchlight picked up a huge and dark hairy creature standing upright and motionless by the creek crossing about 60ft away. It was staring directly at me. I panicked and felt great fear of this massive scraggy-looking thing and I shouted out to the guys and I scrambled to get out of the tent attempting to keep the light on the creature.

360 Virtual Tour of the Yowie Encounter Site Below

I heard David and Michael come bursting out of their tents and just as they did I heard some strange clicking sounds again to my left and the creature turned its gaze swiftly from me to its right and I immediately heard crashing in the bushes off to our left where I shone the torch. I couldn’t pick up anything in the bush and I shouted to David to look over there. He also shone a torch in the direction. Michael yelled out “It’s over here” and Davids’s torch panned around and picked up something large disappearing into the trees by the creek and making a really noisy crashing sound as it moved away from us. David shouted, “what the hell is that”. I immediately shone my torch back to where I originally saw the creature and caught it disappearing at speed away from us, down the path to the causeway on all fours in a really, really weird spider-like movement like nothing I had ever seen.

I was frantic and starting to shake by this stage saying to David “we have to get out of here now”. I tried to explain what I saw, a massive hairy creature, standing on two legs and looking right at me. I was so fearful and confused at what I had just seen that I insisted on packing up and leaving and the guys agreed. We feverishly pulled our tents apart loaded up the bikes and sped off into the night. My adrenalin levels began to settle down as we finally approached the town of Woolooga on daybreak. The growing daylight eased our demeanors as we discussed and took stock of what had happened.

When I think back about what I had seen, there were three things that really terrified me. Firstly it was the sheer size of this thing. I work as a vet and deal with cattle and horses of all sizes and this thing was out of this world by size and easily 9 or 10 feet tall with scraggy hair but looked muscular. The second thing which probably was the most terrifying for me was the look from the creature. I had the impression it was seriously assessing me and it looked sort of calculating, there was intelligence in its creepy animalistic face and this scared the hell out of me. The last thing was how it moved when I caught it disappearing into the night. Its movement on its arms and legs was unnatural and almost mechanical like with a weird up and down movement of its limbs as it crawled quickly into the darkness. This was so weird. We reckon there were two of them which is what we glimpsed off to our left and crashing into the creekside brush when Michael shone the light at it. I have never seen any animal move this way and I hope I never see it again.

Thanks to John at yowie sightings for taking the time to listen to us and checking out the site. We will not be going back any time soon.

Ian gave us a great description of his Yowie sighting. When I asked him about the clicking sounds he heard he said it was a similar sound to a clicking noise we could make with our tongue pressed against the roof of our mouth. He believes this was some type of communication between the two creatures.

We did a thorough location investigation for this post to get a good understanding of the environment the Yowies were observed in. We have had several other reports in this region. This particular location is nestled between two forests and watercourses run throughout the area which has few inhabitants and traffic being basically grazing country for cattle. We believe this area bounded by Glenbar National Park to the east, Giggooman State Forest and Grongah national Park to the west provides the perfect habitat for these mostly nocturnal creatures and supported by the continuing reports from the region.

Yowie sighting reports published on our blog are provided as-is. We don’t publish reports received until we have interviewed the witness or witnesses either in person, email or by phone.