Many people drive for a living, but which job’s drivers have the cleanest records on the road?

The job market as we know it has radically changed throughout 2020. In late March, the onset of the coronavirus pandemic led to an economic shutdown when stay-at-home orders were enforced. While many companies shifted to a remote model, employees in certain industries that rely heavily on in-person transactions, such as restaurants and retail, saw an unprecedented surge in unemployment. As public transportation systems were largely vacated and the demand for at-home deliveries surged, different occupations that involve driving saw unanticipated and diverse outcomes.

For workers who drive for a living, the pandemic may have greatly increased or dramatically decreased their capacity to work. Delivery workers have been busier than ever, due to the lack of in-person shopping during quarantine — many large online retailers have had to quickly hire significant quantities of delivery workers to meet this growing need. However, drivers that work in transportation for travelers and commuters, such as in the rideshare industry, have had a decline in consumer demand as Americans have been advised against entering enclosed public spaces. Additionally, during a public emergency, rideshare companies are banned from implementing surge pricing, which increases the cost of a ride during peak hours — the difficulty to profit from driving, compounded with the public health threat of riding in an unknown vehicle, has decreased the number of rideshare drivers on the road.

Cities across the U.S. are in different stages of reopening and, for some, re-shutting down. The role of drivers in the American economy is likely to continue to see interesting and unpredictable shifts as the coronavirus pandemic remains a significant public health issue. To better understand the driving habits of different job sectors, the research team at Insurify looked to the data to determine the driving jobs with the best and worst records. 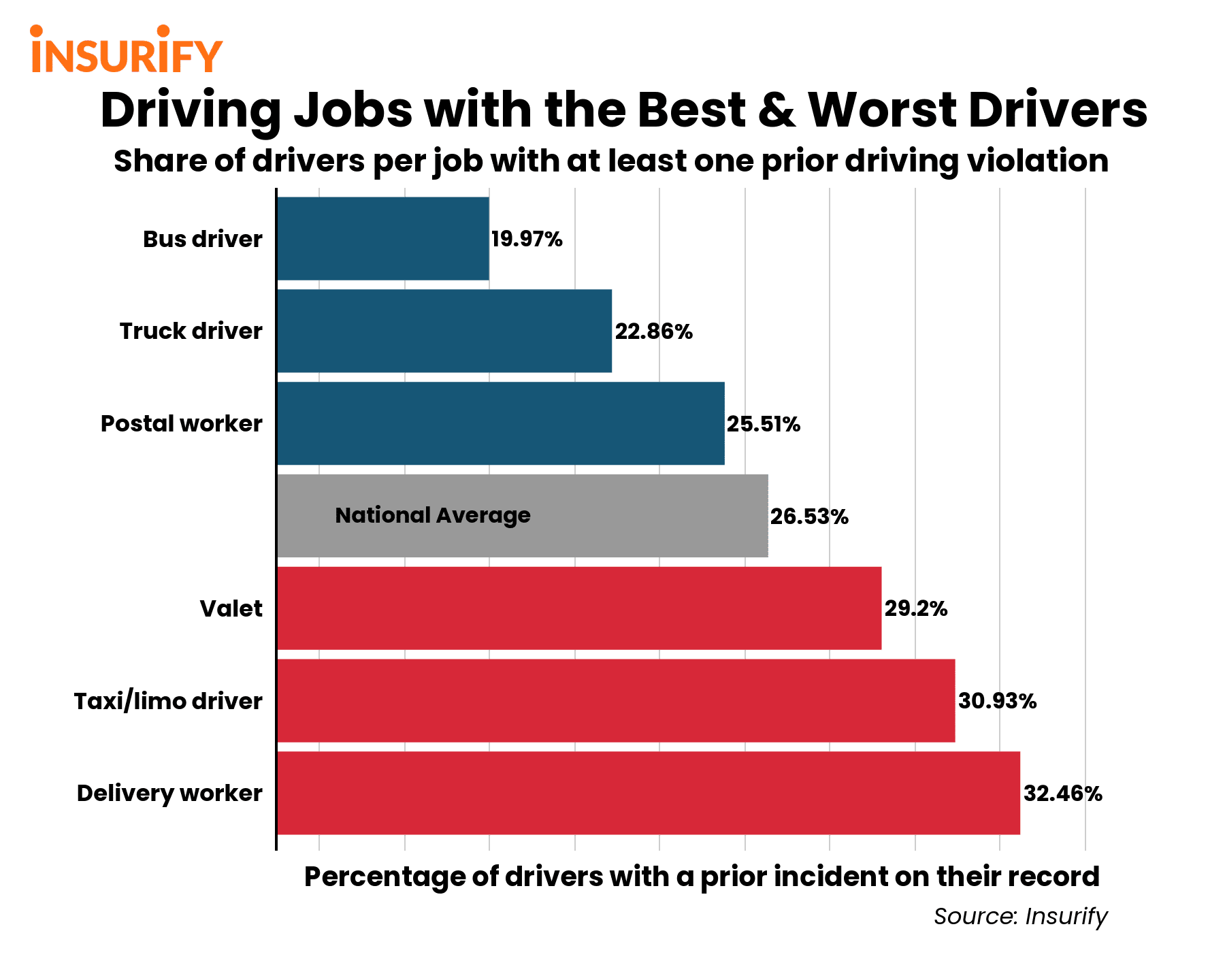 To determine which driving jobs have the best and worst records, the data science team at Insurify, a website for auto insurance quotes comparison, analyzed its database of over 2.5 million car insurance applications. To receive quotes, drivers provide personal information and driving history, including their current occupation. Of applicants who drive for a living, the number with at least one recorded moving violation in the last seven years was compared against the total number of car owners in that driving profession to determine the percentage with a prior incident.

Data for specific occupations, including the mean annual wage, the number of people employed, and the state with the highest concentration of jobs and location quotients were extracted from the Bureau of Labor Statistics’ most recent reports in May 2019. It is important to note that due to the aforementioned COVID-related changes in these driving sectors, the statistics for the number of people employed in each occupation may not accurately reflect the current moment.

The U.S. postal service is not only an integral public institution upon which our communities rely, but it is also an occupation composed of good drivers. The on-road incident rate of postal workers is below the national average and within the top three driving jobs with the cleanest records. Delivering mail along established routes requires knowledge and awareness of space and traffic patterns that likely contribute to postal workers’ stellar driving records. Postal workers across the country deserve recognition for their public service and conscientious driving habits.

With an incident rate that’s 14 percent below the overall national average, truck drivers have the second-cleanest records across driving occupations. The pool of drivers within this occupation is vast, with 1.8 million truck drivers employed as of 2019. Given the need for efficiency and reliability in supply chain logistics, competent and safe driving on the part of truck drivers is a necessity. The skills needed to navigate cross-country roads towing heavy loads likely work to reduce truck drivers’ incident rate.

Many Americans rely on the bus as their main source of public transportation, especially in cities that do not have local train or subway systems. Luckily, bus drivers have the cleanest driving records of the driving occupations on this list. On average, the percentage of bus drivers with an incident on their record is 25% lower than the national mean. Given the added difficulties bus drivers have faced during the pandemic from job shortages to non-socially distanced working conditions, their stellar driving records are worthy of recognition. Recently, the shortage of bus drivers across school districts has demonstrated their integral nature to our transportation systems — bus drivers do not just have some of the best driving records, but are essential to the economy and education infrastructure.

There may be more situations reminiscent of Ferris Bueller parking the Ferrari in the public garage than we realize, because valets have a driving incident rate that’s 10 percent higher than the national average. Parking attendants additionally earn less than the average annual wage, even for a driving job — their average yearly earnings of $26,450 are 40 percent below the national mean for driving occupations. Valet jobs were likely among the early casualties in terms of lay-offs and furloughs following the shutdown of most public venues. Additionally, people have become more wary of having strangers get into their vehicles. The role of valets and parking attendants throughout the pandemic have been slightly unstable, especially since many cities that reopened early are shutting down again.

Yes, we’re talking to you! Taxi and limo drivers have some of the worst driving records across all driving occupations. With an incident rate 15 percent higher than the national average, it’s clear that taxi drivers do not take the utmost care in following the rules of the road. Taxi and limo drivers are often used to take people between locations, as opposed to other jobs on this list that primarily transport goods. The pressure to beat traffic and arrive on time for a flight or event likely contributes to the rushing and inevitable traffic violations that hike up these drivers’ incident rate.

It cannot be denied that delivery workers are some of the emergent heroes of the pandemic. Without them, people in quarantine would not be able to receive necessities like cleaning supplies, new books, and the loungewear that’s replaced office attire. Likewise, the demand for delivery workers throughout the pandemic has increased dramatically, providing an opportunity for employment at a time when many companies are unable to hire. Perhaps given the pressing demand and relatively minimal requirements needed to become a delivery worker, drivers with this occupation have some of the least-clean driving records with an incident rate 19 percent above average. Despite these worse-than-average incident histories, however, delivery workers are still without a doubt invaluable to the pandemic-era new normal.