Home Sweet Home: Communities with the Most Homeowners

Home Sweet Home: Communities with the Most Homeowners

In 2020, Americans have spent more time at home than ever before. Which communities have the most residents with the fortune of owning those homes?

Never has it been nobler to cancel plans and stay at home than in 2020. According to estimates by the Urban Health Collaborative at Drexel University’s Dornsife School of Public Health, the shelter-in-place orders put into effect within just the 30 largest metro areas in the U.S. prevented over 200,000 deaths and over 2 million hospitalizations.

Even as shelter-in-place measures are easing, the ramifications of this pandemic are still imposing major hardships on many households. As jobless claims have passed 40 million, many Americans who cannot transition to remote work have had to eat into their savings to make ends meet. However, there are some financial protections uniquely benefitting homeowners during this outbreak. For example, since the passage of the CARES Act, mortgage holders with a forbearance plan will face no ramifications to their credit reports if they must temporarily reduce or halt payments.

Homeownership comes with a number of benefits. Owning one’s house is correlated with higher volunteering and civic engagement, improved health outcomes, lower crime, and better educational performance for children. With this in mind, the data science and research team at Insurify crunched the numbers to see which communities have the highest rates of homeownership in America. 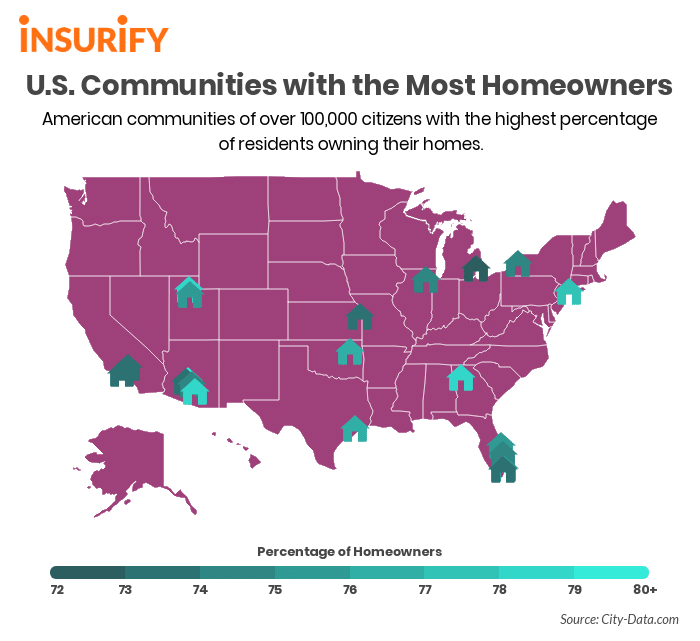 The data science and research team at Insurify, a homeowners insurance quotes comparison site, studied data from City-Data.com to determine the communities in each state with the highest percentage of residents living in homes that they own. Not all communities listed are cities — in fact, some are neighborhoods, standalone municipalities, regions, or even counties – but all have a population exceeding 100,000, focusing the analysis on communities that are mid-size or larger. Statistics on population and marital status were also sourced from City-Data.com.

Cities with the Most Homeowners in the United States