These are the Best & Worst Cities at Sheltering in Place

These are the Best & Worst Cities at Sheltering in Place

Which major U.S. cities aren’t staying at home during shelter in place?

As many states have issued stay-at-home orders, typical forms of transportation like driving — and even walking and public transit — have been significantly disrupted. The governors of up to 30 states have even implemented measures discouraging interstate travel.

These travel restrictions are unsurprisingly causing changes in driving behaviors. Miles driven have declined 55% over the last month, while driving frequency may be down as much as 40% according to recent numbers from Progressive Insurance. With fewer drivers on the road, top insurance companies like GEICO, Progressive, and State Farm are giving back 15-25% of customers’ premiums.

Staying at home isn’t always an option, though, especially for essential workers in hospitals or grocery stores. The Insurify Insights team dives into the data to understand how these regulations have changed mobility rates in cities across the United States. 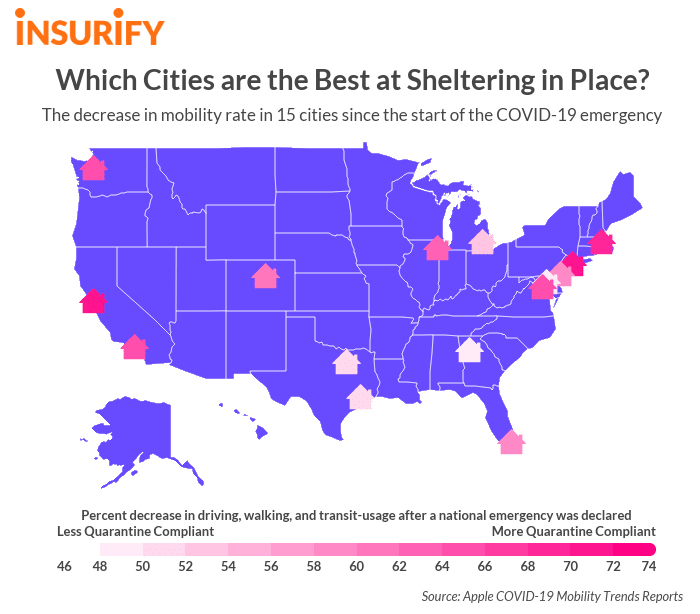 To determine which cities’ travel restrictions had the biggest impact on mobility in the United States, the researchers at Insurify, a website for auto insurance quotes comparison, compiled data on relative changes in driving, walking, and use of public transit in 15 major cities. Numbers were provided by Apple, a consumer electronics company. The Apple Maps service compared the relative volume of directions requests per city to a baseline volume on January 13, 2020. The data is sent from users’ devices to the Apple Maps service and is anonymized.

The Insurify research team compared the change in relative Apple Maps directions requests 38 days before and after March 13th, 2020, the day President Trump declared a national state of emergency. The higher the percentage, the bigger the decrease in direction requests.