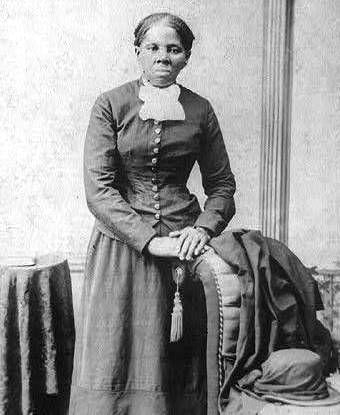 Born into slavery on a Maryland's Eastern Shore in 1822, Tubman was named Araminta by her enslaved parents, Ben and Rit Ross. Nearly killed at the age of 13 by a blow to her head, "Minty" recovered and grew strong and determined to be free.

Changing her name to Harriet upon her marriage to freeman John Tubman in 1844, she escaped five years later when her enslaver died and she was to be sold. One hundred dollars was offered for her capture. Vowing to return to bring her family and friends to freedom, she spent the next ten years making about 13 trips into Maryland to rescue them. She also gave instructions to about 70 more who found their way to freedom independently.

Tubman successfully used the skills she had learned while working on the wharves, fields and woods, observing the stars and natural environment and learning about the secret communication networks of free and enslaved African Americans to affect her escapes. She later claimed she never lost a passenger. The famous abolitionist William Lloyd Garrison called her "Moses," and the name stuck.

During the Civil War, she served the United States Army as a spy, scout, nurse and cook and, as a result, received military recognition at her burial. A lifelong humanitarian and civil rights activist, she formed friendships with abolitionists, politicians, writers and intellectuals. She knew Frederick Douglass and was close to John Brown and William Henry Seward. She was particularly close with suffragists Lucretia Coffin Mott, Martha Coffin Wright, and Susan B. Anthony. Intellectuals in New England's progressive circles, such as Ralph Waldo Emerson, William Lloyd Garrison, Bronson Alcott, Harriet Beecher Stowe, Franklin B. Sanborn, and Mrs. Horace Mann, befriended her, and her work was heralded beyond the United States. Harriet Tubman died in 1913 in the Auburn, N.Y. home she purchased from Secretary of State William Seward in 1859.