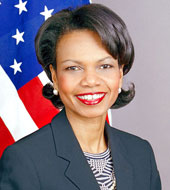 © Office of The Historian

From the Office of The Historian

After her graduation, Rice accepted a position at Stanford University as a professor of political science. In 1987 she served as an advisor to the Joint Chiefs of Staff, and in 1989 was appointed director of Soviet and East European Affairs on the National Security Council.

In 2001 she was appointed National Security Advisor by President George W. Bush, and succeeded Colin Powell as Secretary of State in 2005.

As Secretary of State, Rice supported the expansion of democratic governments, and championed the idea of "Transformational Diplomacy," which sought to redistribute U.S. diplomats to areas of severe social and political trouble, address such issues as disease, drug smuggling and human trafficking, and reemphasize aid through the creation of the position of Director of Foreign Assistance.

Rice helped successfully negotiate several agreements in the Middle East, including Israeli withdrawal from and the opening of the Gaza border crossings in 2005 and the August 14, 2006 ceasefire between Israel and Hezbollah forces in Lebanon. Rice organized the Annapolis Conference of November 27, 2007, which focused on finding a two-state solution to the Israeli-Palestinian problem.

Rice also worked actively to improve human rights issues in Iran and supported the passage of a United Nations Security Council Resolution for sanctions against the country unless its uranium enrichment program was curtailed.

Another major concern for Rice was North Korea's nuclear program, and its subsequent testing of a nuclear weapon. Rice was firmly against holding bilateral talks with North Korea, although she welcomed their participation in the Six Party Talks between China, Japan, Russia, North Korea, South Korea, and the United States.

In October 2008, one of Rice's most successful negotiations came to fruition, with the signing of the U.S.-India Agreement for Cooperation Concerning Peaceful Uses of Nuclear Energy (123 Agreement), which would allow civil nuclear trade between the two countries.