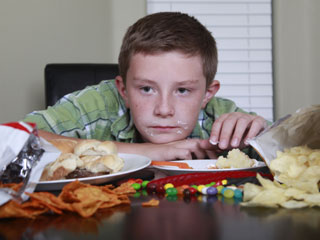 (HealthDay News) -- Having a stable family and a good relationship with mom and dad makes young people more likely to develop healthy habits that may protect them against obesity, a new study suggests.

The researchers also found that fathers are especially important for helping their sons to develop behaviors that will allow them to maintain a healthy weight.

"A high level of family dysfunction may interfere with the development of healthful behaviors due to the families' limited ability to develop routines related to eating, sleep or activity behaviors, which can lead to excess weight gain," said the study's lead author, Jess Haines, of the University of Guelph in Ontario.

About 80 percent reported having close and stable families. The findings showed that 60 percent of daughters and 50 percent of sons said they had a good relationship with their parents.

The investigators found that children with stable families and strong relationships with their parents were more likely to follow a healthy diet. They were also more likely to be physically active and get enough sleep.

The daughters in these families ate less fast food, and were less likely to be overweight or obese, the researchers found.

Among the sons, those who had a close relationship with their father were less likely to be overweight or obese, according to the report.

"Much of the research examining the influence of parents has typically examined only the mother's influence or has combined information across parents," Haines said in a university news release.

"Our results underscore the importance of examining the influence fathers have on their children, and to develop strategies to help fathers support the development of healthy behaviors among their children," she said.

"It appears the father-son parent relationship has a stronger influence on sons than the mother-daughter relationship has on young women," said Haines. She added that more research needs to be done to figure out why this difference exists.

The study findings highlight the importance of family behaviors and relationships on young people's health.

The study was published recently in the International Journal of Behavioral Nutrition and Physical Activity.

The U.S. Centers for Disease Control and Prevention has more about raising healthy teens.