Most Americans are eating better

Most Americans are eating better 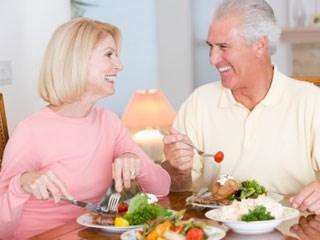 (HealthDay News) -- More than half of Americans were eating healthier in 2012 than they were in 1999, a new study finds.

In fact, the percentage of adults with poor diets dropped from 56 percent to 46 percent during that period. By 2012, people ate more whole grains, fruit, nuts, seeds and fish while cutting back on sugar-sweetened drinks, the researchers found.

"Many Americans are starting to pay attention to healthier diets. This is encouraging, and farmers, food manufacturers, retailers and restaurants should take notice," said lead researcher Dr. Dariush Mozaffarian. He is dean of the Tufts Friedman School of Nutrition Science and Policy in Boston.

Despite these gains, the number of Americans eating an "ideal" diet increased only slightly, from 0.7 to about 1.5 percent, the investigators found. An ideal diet includes fruits, vegetables, fish, whole grains and less meat, salt and saturated fat.

Moreover, disparities persisted in the quality of diet based on race or ethnicity, education and income. Among whites, those with a poor diet decreased from 54 percent to 43 percent. But little change was seen among blacks, Mexican-Americans and Hispanics, the findings showed.

Not only did these disparities persist, but based on income, they may have widened slightly, Mozaffarian said.

In addition, Americans weren't eating more total fruit and vegetables, and they were still consuming too much processed meat, saturated fat and salt, he said.

A poor diet leads to poor health, particularly obesity, diabetes, heart disease and some cancers. Each year, more than 650,000 Americans die from conditions related to diet, the researchers said.

Improving America's diet goes beyond what people can do by themselves, Mozaffarian said.

"Government, industry and advocacy efforts are needed to improve many aspects of our food system, in particular to further promote minimally processed, healthier foods and reduce refined grains, starches and sugary drinks," he said.

Programs and policies that change the "food environment, rather than focusing on education or labeling alone, are crucial to help ensure healthier food for all," Mozaffarian said.

The report was published June 21 in the Journal of the American Medical Association.

For the study, Mozaffarian and colleagues collected data on nearly 34,000 adults who took part in U.S. National Health and Nutrition Examination Surveys between 1999 and 2012. In the surveys, people were asked about their diet.

Dr. Margo Denke, author of an accompanying editorial, said that "all sectors of the population are drinking fewer sugary drinks, likely because we are now drinking bottled water, and we are eating a little more whole grains." Denke, of Bandera, Texas, was formerly with the University of Texas Southwestern Medical Center at Dallas.

"What we haven't yet succeeded in doing is consuming less salt, more fish and shellfish, and more fruits and vegetables," she said.

The reasons diets are changing are complex, Denke said. However, some of the lack of change is due to the cost and availability of fruits and vegetables and fish, she noted.

But people can change their diet, Denke said. Some changes are simple substitutions: bottled water instead of sugary drinks; whole grain products instead of refined-grain products; fish or shellfish two nights a week instead of chicken, beef or pork, she suggested.

Other changes involve adoption of new things: fruit instead of salty or sweet snacks, and switching to low-salt luncheon meats and canned soups, Denke added.

"Look at your mealtime plate and see if you can make half of the plate containing low-carbohydrate vegetables, such as carrots, greens, peppers, broccoli, cauliflower, beets or zucchini," she said. "You can do it. Small changes can change your diet to a healthier one."

Visit the U.S. National Heart, Lung, and Blood Institute for more on a healthy eating plan.