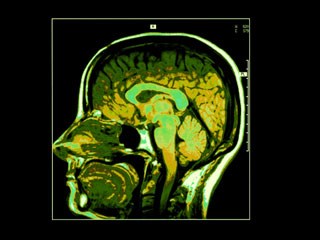 (HealthDay News) -- Teens with type 2 diabetes may have differences in gray matter in their brains, a small study found.

Researchers conducted brain scans on 20 teens with type 2 diabetes and 20 teens without the blood sugar disease. Those with diabetes had less gray matter in six regions in their brains, and more gray matter in three regions. Some of these affected regions are involved in seeing and hearing, speech, memory, emotions, decision-making and self-control, the researchers said.

The Cincinnati Children's Hospital Medical Center team also found an association between less gray matter and the ability to pronounce and sound out unfamiliar words.

"Previous studies suggested that youth with type 2 diabetes have changes in brain structure and poorer cognitive function scores compared to their peers," said senior study author Dr. Amy Sanghavi Shah. She is a physician-scientist in the hospital's division of endocrinology.

"Total and regional brain volume had not been assessed comprehensively until now. We also sought to determine if the findings we found here could explain poorer cognitive scores," Shah said in a hospital news release.

The researchers stressed that they only found an association. "Our results do not show cause and effect," said study author Dr. Jacob Redel, a fellow in the division of endocrinology.

"We don't know if the changes we found are the direct result of diabetes, but studies in adults with type 2 diabetes with longer duration of disease also show brain volume differences, brain vascular changes and cognitive decline," Redel said.

"Our findings suggest that preventing type 2 diabetes in adolescents is important to prevent possible complications in the future," he added.

The study was to be presented Tuesday at the American Diabetes Association annual meeting, in New Orleans. Research presented at meetings is considered preliminary until published in a peer-reviewed medical journal.

Redel and his colleagues hope to conduct a larger study to determine if the gray matter differences seen in teens with type 2 diabetes are more strongly linked with either obesity or high blood sugar, and whether other brain functions such as intellect, attention, memory and language are affected.