Got a spare 15 minutes? A little exercise may boost life span

Got a spare 15 minutes? A little exercise may boost life span 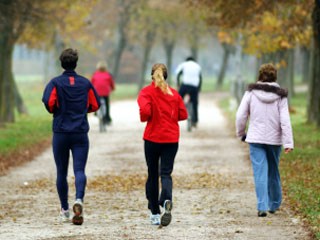 The research included more than 123,000 people, aged 60 and older. The study's mean follow-up time was 10 years. Compared to those who were inactive, those with low levels of activity were 22 percent less likely to die during the study period, the investigators found.

In addition, for people with medium and high levels of physical activity, the risk of dying during the study was reduced by 28 percent and 35 percent, respectively, compared to people who weren't active at all.

The findings were scheduled to be presented Tuesday at the European Society of Cardiology meeting in Sophia Antipolis, France.

The study wasn't designed to prove a cause-and-effect relationship, but the results "show that the more physical activity older adults do, the greater the health benefit. The biggest jump in benefit was achieved at the low level of exercise, with the medium and high levels bringing smaller increments of benefit," said Dr. David Hupin, of the University Hospital of Saint-Etienne, France.

The low level of exercise is equivalent to a 15-minute brisk walk each day, according to Hupin.

"Age is not an excuse to do no exercise," he said in a society news release. "It is well established that regular physical activity has a better overall effect on health than any medical treatment. But less than half of older adults achieve the recommended minimum of 150 minutes moderate intensity or 75 minutes vigorous intensity exercise each week."

"Fifteen minutes a day could be a reasonable target for older adults. Small increases in physical activity may enable some older adults to incorporate more moderate activity and get closer to the recommended 150 minutes per week," he concluded.

Research presented at meetings should be viewed as preliminary until published in a peer-reviewed journal.

The U.S. National Institute on Aging has more about exercise and physical activity.