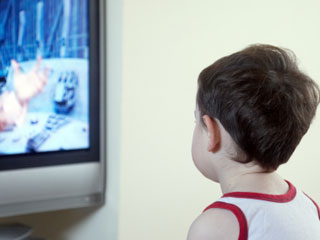 (HealthDay News) -- For some families, moments where parents spend time playing, reading or conversing with kids may be a thing of the past, new research suggests.

The small study -- just 44 families -- found preschoolers now often spend hours each day watching TV or playing video games -- with little or no oversight or interaction from a parent.

Only a handful of kids aged 3 to 5 years old received active engagement from their moms as they sat glued to the "electronic babysitter," according to the University of Michigan study.

One expert wasn't surprised by the findings.

"Parents are off doing the dishes or folding laundry while the kids are plugged into their technology, and the parents aren't sitting with them and watching together," he said.

In the study, researchers used enhanced audio equipment to track the home environment of preschoolers in 44 volunteer families during 2010 and 2011.

Special software allowed the researchers to sift through hours of recordings so they could listen in whenever audible electronic media signals were present in the home.

The researchers then coded the type of interactions that children had with their mothers at the time, as well as the sort of shows they were watching or games they were playing.

The result: preschoolers most often watched TV, which took up 80 percent of the recorded media use, the research showed. Video games accounted for another 10 percent of electronic media use, and the rest included computers, tablets, cellphones, audio books or educational products.

Parental interaction was rare during these times. About 58 percent of families had zero instances of parent-child conversation regarding the media the child was watching. In 35 percent of cases, parents engaged in dialogue in one-third or fewer of the recorded media segments, the study found.

"This included interactions where children attempted to get their parent's attention to talk about the TV or the movie they were watching, and received no response," said study co-author Sarah Domoff.

Only three families -- 7 percent of the sample -- communicated about whatever their child was watching for the majority of the time the TV was on in the house, the findings showed.

And with most parents' attention focused elsewhere, 58 percent of the children wound up exposed to adult television or movies at some point during the study. Examples included "Sex and the City," "Grey's Anatomy" and "Scary Movie."

"We're not hearing what we call 'active mediation,' or parents mediating or processing the content and then emphasizing or challenging messages that the children are receiving," said Domoff. She's a research fellow at the university's Center for Human Growth and Development.

Fornari agreed that many parents aren't considering the impact unsupervised media exposure might have on a preschooler's developing brain. He believes that kids' ability to socialize and communicate might be harmed or altered.

"We don't know the impact of this early and large dose of media exposure to young developing brains," Fornari said. "Clearly, it's something that may have a profound impact. These children are going to grow up in a generation that's connected to their technology at a much earlier age."

There are things parents can do to change all that, however. Aside from turning off the tube, parents can help by carefully guiding their children's media use, Domoff said.

"Parents should be aware of what they're watching, and step in if they hear a message that doesn't resonate with their family values -- or if they feel there's a message that's positive," she said.

She said that if parents use TV to keep kids occupied, they should create a video library of selections they deem appropriate, or limit viewing to channels with programming and commercials that match the family's values.

Domoff presented these findings at the recent Association for Psychological Science conference in Chicago. The findings should be viewed as preliminary until published in a peer-reviewed journal.

For more on kids and media, visit the American Psychological Association.