Overweight kids eat only a bit more per meal

Overweight kids eat only a bit more per meal 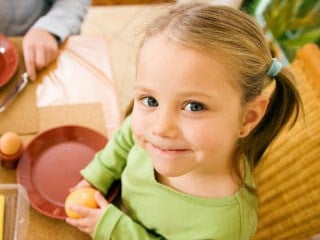 (HealthDay News) -- An extra spoonful or two with each meal may lead to an overweight infant or toddler, a new study suggests.

British researchers found that overweight infants and toddlers don't eat more often than their normal-weight peers, but they do consume just a little bit more food at each meal.

"Although the difference in average meal size between the overweight and healthy-weight children seems small [11 calories, perhaps an extra spoonful of baked beans with a meal] children are eating on average five times per day so the difference over the course of a week is considerable," study author Hayley Syrad, from University College London, and colleagues, wrote.

The study included data from more than 2,500 children in the United Kingdom. They were between 4 months and 18 months old.

The researchers also noted that overweight and normal-weight children were eating the same types of foods. The overweight kids were just eating more of those foods.

"This small extra intake each meal means that overweight children are consuming approximately two extra days' worth of energy each month. Given that these children are less than 2 years of age, over time the effects could be substantial," the study authors concluded.

The risk of overweight or obesity went up 9 percent for every extra 24 calories consumed during each meal, the researchers said.

"Larger portions, rather than eating more often, may be a risk factor for the development of childhood overweight in early life. Further prospective studies that look at the development of excess weight over time are needed to establish causation," the researchers said.

The study was to be presented Friday at the European Obesity Summit in Sweden. Findings presented at meetings are generally viewed as preliminary until they've been published in a peer-reviewed journal.

The U.S. Centers for Disease Control and Prevention has more on childhood overweight and obesity.