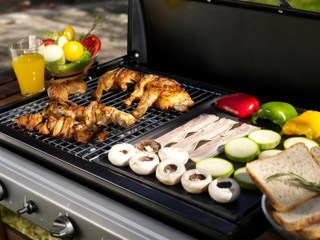 FRIDAY, May 27, 2016 (HealthDay News) -- As Americans fire up their grills this Memorial Day weekend, experts note that while there isn't enough evidence to conclude that barbecued meat increases cancer risk, it's still a good idea to take some precautions.

"Smoking or charring meat also contributes to the formation of PAHs. These substances are carcinogens, with the potential to cause changes in DNA that may lead to cancer," Bender said in a news release from the nonprofit organization.

She outlined how to reduce the potential risks associated with grilling. Research has suggested that marinating meat before putting it on the barbecue can decrease the formation of HCAs.

If you're using large cuts of meat, partially precook them in the microwave, oven or on a stove immediately before you put them on the grill. That will reduce the length of time the meat is exposed to flames, Bender said.

Another way to shorten cooking time on the barbecue is to cut meat into smaller portions.

Trim fat off the meat to reduce flare-ups and charring, cook the meat in the center of the grill, and flip it often, Bender said.

Try putting vegetables and fruits on the barbecue, because grilling them produces no HCAs.

It's also important to remember that no matter how you cook it, eating too much red meat and processed meat increases the risk of colon and stomach cancer, Bender said.

"What matters most is what you cook, not how you cook it," she said. "It's clear that what you eat day to day -- focusing on vegetables, whole grains, beans and fruit over red meat -- provides the most cancer protection."

The U.S. National Cancer Institute has more about how meat is cooked and cancer risk.