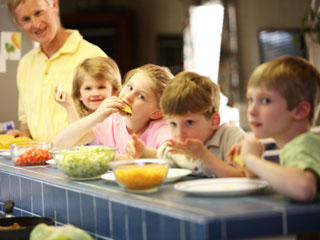 (HealthDay News) -- Late suppers may not be a recipe for childhood obesity, a new study shows.

Some previous research has suggested that the timing of meals could affect the risk of being overweight or obese, the investigators said.

British researchers looked at data from more than 1,600 children, aged 4 to 18. They found that the risk of overweight or obesity was no higher among those who had meals between 8 p.m. and 10 p.m. than among those who ate between 2 p.m. and 8 p.m.

"The findings of our study are surprising. We expected to find an association between eating later and being more likely to be overweight, but actually found that this was not the case. This may be due to the limited number of children consuming their evening meal after 8 p.m.," said study author Gerda Pot, visiting lecturer in the diabetes and nutritional sciences division at King's College London.

"'Alongside changes in dietary quality and levels of physical activity, meal timing is one of many possible factors that has been suggested as influencing the trends in weight gain seen in children in the U.K.," Pot said in a school news release.

"However, the significance of its role is under-researched. As this is one of the first studies investigating this link, it would be useful to repeat the analysis in other studies," she added.

Pot said that the researchers are now looking at other factors that may play a part in childhood obesity, such as eating breakfast and sleep habits.

The results were published recently in the British Journal of Nutrition.

The American Heart Association outlines how to prevent childhood obesity.