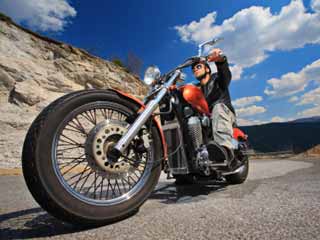 (HealthDay News) -- Motorcyclist deaths in the United States topped 5,000 last year -- a 10 percent increase from 2014, according to a new report.

"These sobering findings provide a stark reminder of how susceptible motorcyclists are to fatal and life-threatening injuries," said Richard Retting, co-author of the report from the Governors Highway Safety Association.

"The risk of motorcycle crashes and fatalities is compounded by factors such as alcohol and drug use, increased speed limits, the repeal of state helmet laws, and a record number of vehicles on U.S. roads," Retting said in an association news release. "Concerted efforts are needed to reduce this tragic loss of life."

Preliminary statistics suggest there were 5,010 motorcyclist deaths in 2015, which is 450 more than the previous year. It's only the third year in U.S. history and the first time since 2008 that the number of motorcyclist deaths was above 5,000, the report authors said.

Compared with 2014, motorcyclist deaths rose in 31 states, fell in 16 states and stayed the same in three states and the District of Columbia, the findings showed.

Restoring universal helmet use laws in the 32 states without them would be the most effective way to reduce motorcyclist deaths, according to the association. Only 19 states and the District of Columbia currently require all motorcyclists to wear helmets, while another 28 mandate helmets for riders younger than 18 or 21. Three states have no helmet laws.

The rate of helmet use is 89 percent in states with universal helmet laws, compared with 48 percent in all other states, a U.S. National Highway Traffic Safety Administration study found in 2014.

Jonathan Adkins, executive director of the highway safety association, said state and national data illustrate that motorcyclists are far more likely to be injured or killed in a crash than drivers of motor vehicles or their passengers.

He said the association will continue to support "the development, implementation, and evaluation of evidence-based motorcycle safety countermeasures to improve rider safety and, ultimately, save lives."

Safety experts say motorcyclists can reduce their risk of being killed in a crash by always using a Department of Transportation-approved helmet; wearing bright-colored clothing; obeying speed limits; and never riding while under the influence of alcohol or drugs.

When buying a motorcycle, riders should select one with antilock brakes, which prevent the wheels from locking and help maintain stability during braking, the association said.