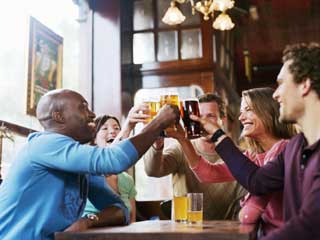 (HealthDay News) -- Areas with more bars have about eight times more ambulance calls than places where booze flows less freely, according to a new study.

Dr. Joel Ray, a physician at St. Michael's Hospital in Toronto, examined trends in EMS calls and the density of alcohol-serving establishments in certain areas near the city.

Neighborhoods with the most establishments licensed to sell alcohol have a 7.8 times higher risk for 911 calls related to trauma compared to areas with the fewest of these places, the study found.

The study also showed that EMS calls in response to assaults near bars or restaurants peak around last call, or 2 a.m.

Ray also noted that EMS calls nearly triple at the end of the month when many people get paid, suggesting alcohol consumption is related to how much money people have, not just the cost.

"We reiterate that public policies that raise prices of alcohol are an effective means to reduce drinking," Ray said in a hospital news release. "Given the province of Ontario's actions to liberally increasing access to alcohol, such as through grocery stores, it is imperative that pricing remains high."

The study's findings likely apply to areas other than Ontario, Ray said. He said local governments should consider limiting the number of liquor licenses in areas that already have lots of bars, or in areas with a very high number of emergency calls for public drunkenness, assault or other trauma.

He also suggested that EMS personnel should have a checklist to help determine if people should be taken directly to a detoxification center.

"It is time to take a more active stance about a substance that is legal, widely available yet harmful," Ray said.

The study finding were published May 13 in the journal Medicine.

The U.S. National Institute on Alcohol Abuse and Alcoholism discusses how alcohol affects the body.