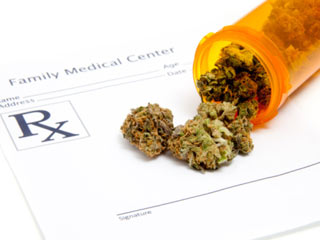 (HealthDay News) -- Most doctors approach medical marijuana with a great deal of uncertainty, because drug laws have hindered researchers' ability to figure out what pot can and can't do for sick patients.

That could soon change.

The U.S. Drug Enforcement Administration (DEA) is weighing whether to loosen its classification of marijuana, which would remove many restrictions on its use in medical research.

If that occurs, doctors could start getting answers to the questions they regularly receive from patients regarding marijuana's clinical benefits.

"I am asked as a practicing doctor even in a rural area about medical marijuana use, and I want to make sure I can give patients advice that's evidence-based," said Dr. Robert Wergin, board chair of the American Academy of Family Physicians. "We need those kinds of studies to help us give informed advice to our patients who ask about it now," he explained.

The DEA has said it will decide this summer whether marijuana should be lowered from a Schedule I drug to a Schedule II drug, according to an April memo from the agency to Congress.

Schedule I drugs are considered drugs "with no currently accepted medical use and a high potential for abuse," the DEA says on its website. Heroin, LSD and ecstasy stand alongside marijuana on the DEA's Schedule I list.

On the other hand, Schedule II drugs have a high potential for abuse, but "there is the recognition that they have some medical value as well," said Dr. J. Michael Bostwick, a professor of psychiatry at the Mayo Clinic, in Rochester, Minn.

"This could be an important softening of regulations that make it difficult to do marijuana or cannabis research in this country," Bostwick said.

Morphine, methamphetamine, cocaine and oxycodone are all Schedule II drugs, "because they have medical applications," Bostwick said. "So, it's not as if we don't have precedent for substances that are dangerous from an addictive point of view being useful in certain medical situations."

Studies have shown that marijuana might help decrease chronic pain and nausea, ease seizures, improve the appetite or be useful in psychiatric treatment, Wergin and Bostwick said.

But none of those studies has been large-scale and a definitive clinical trial. The reason: because marijuana's DEA drug status prevents scientists from using large quantities of the plant in medical research, Wergin and Bostwick said.

All marijuana available for research purposes in the United States is grown at the University of Mississippi, which has an exclusive contract with the U.S. National Institute on Drug Abuse (NIDA) to provide the nation's entire research supply, according to the DEA's memo to lawmakers.

In any given year, NIDA sends shipments of marijuana to a small handful of researchers, usually eight or nine, but sometimes as many as 12, the memo states. Researchers must go through a detailed registration process to gain access to the pot.

The American Medical Association (AMA) has come out in favor of loosening drug laws to "develop a special schedule for marijuana to facilitate study of its potential medical utility in prescription drug products," according to a statement its officials provided ABC News.

Back in December 2014, the American Academy of Neurology lamented the lack of solid marijuana research in a position paper.

Due to strict drug laws, researchers have not been able to determine whether medical marijuana could help treat neurological disorders such as epilepsy, multiple sclerosis and Parkinson's disease, the academy said.

The academy's paper concluded with a call to deschedule marijuana and open it up to more research.

Instead, it's more likely that researchers would focus on how the components of marijuana, such as THC or cannabidiol, interact with the body in ways that might help ease symptoms or illness.

An entire system of receptors has been discovered throughout the body that responds to different components of cannabis, Bostwick said.

"Almost any system you name in the body has a potential cannabinoid receptor that could be manipulated in a way that could be useful," he said. "When the drug was outlawed in 1970, we knew almost nothing about it. In the intervening 45 years, science has shown this endocannabinoid system actually exists. None of that was known when the drug was made illegal."

Such research could result in medications derived from marijuana that would treat conditions without a "high," Wergin said.

Wergin sees two main potential benefits from the descheduling of marijuana and any resulting boom in research.

First, he'd know what to tell patients about pot's particular benefits. And second, he'd feel confident issuing a prescription for a marijuana-based medication, knowing that it's a drug regulated by the U.S. Food and Drug Administration.

"This would result in higher-quality standardized product that's FDA-approved," Wergin said. "If I prescribe you an antibiotic, I'm very confident of what's in it because of the FDA regulations on it. I don't know how to prescribe marijuana to you, or what's even in it."

Paul Armentano, deputy director of the marijuana legalization group NORML, said that at this point a reclassification by the DEA would fall "well short of the sort of federal reform necessary to reflect America's emerging reefer reality."

Armentano added that even with descheduling, federal law still would require researchers to buy pot from NIDA's University of Mississippi marijuana cultivation program.

"Simply rescheduling cannabis from I to II does not necessarily change these regulations, at least in the short-term," Armentano said.