Walking Fido is doggone good for your health

Walking Fido is doggone good for your health 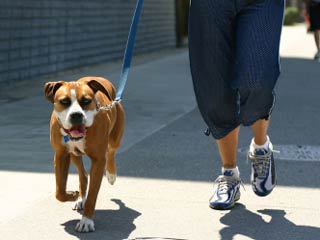 FRIDAY, May 6, 2016 (HealthDay News) -- Walking the dog may be a health boon for older Americans, new research suggests.

Dog walking helps cut back on excess weight and the overall need to visit a physician while raising overall moderate and vigorous exercise levels among the over-60 set, investigators found.

And the strong emotional bonds formed between owner and pet offer social benefits, encouraging increased contact with other pet owners.

"There is a wealth of evidence that walking is beneficial for people's physical health," said study lead author Angela Curl. She is an assistant professor in the department of family studies and social work at Miami University, in Oxford, Ohio.

"[And] what makes dog walking unique is the relationship between people and their dogs, as well as the ways dogs can motivate walking behavior," she added. "Other studies have shown dogs' needs provide a motivation to get out and walk. Our findings illustrate that the emotional bond people have with their dogs may play an important role in getting out to walk."

Curl and her colleagues discussed their work in a recent issue of The Gerontologist.

The authors noted that in 2014, the U.S. Centers for Disease Control and Prevention recommended that all adults, regardless of age, rack up a minimum of 150 minutes of moderate activity every week.

Walking happens to be the most frequent exercise activity among adults 60 and up.

To explore the impact of dog ownership on that, the investigating team analyzed data involving a nationally representative sample of 771 men and women (50 years old and up) collected in 2012 by the Health and Retirement Study. That investigation was conducted at the University of Michigan, with funding from the U.S. National Institute on Aging.

Just over a third of the participants (271) owned at least one dog. Pet ownership involving other types of animals was not considered.

A portion of the dog owners group was asked questions to gauge pet "bonding," including whether they considered their dog a friend, and whether they talked about their dog with others.

The result: While owning a dog was not directly associated with having better overall health among those 60 and up, it was associated with a lower body mass index (a measure of weight and obesity status); fewer physical limitations; less frequent visits to a doctor; and more routine exercise. The study didn't prove a cause-and-effect relationship, however.

But would owning other types of pets also pay a health dividend?

"Other research studies have found that cats and dogs can help reduce loneliness as well as improve health outcomes such as cortisol [stress hormone] levels, cholesterol, and systolic blood pressure," said Curl. "However, we need a lot more research about the potential health benefits of other species of pets, and who might benefit the most [or] least from pet ownership."

Daniel Promislow, an American Federation for Aging Research (AFAR) spokesperson, and director of the Canine Longevity Consortium at the University of Washington in Seattle, heralded the special benefits of dog ownership.

"On average, dog owners walk more," he said, "and score better on stress tests and other measures of psychological well-being. There is even some suggestion in the scientific literature that owning a dog is associated with a lower risk of various diseases [perhaps from that extra exercise], and faster recovery times when disease does occur.

"So it would seem that for people in their later years, there are a variety of benefits that come from having a companion dog," Promislow said.

Dr. Alice Pomidor, a geriatrics professor at Florida State University College of Medicine in Tallahassee, noted that in general, "pet ownership can lead to increased physical activity, as well as a greater sense of feeling connected to your community and to other pet owners.

"For many older adults, pets are also a great source of comfort after close friends, relatives or partners have passed away," she added. "Hospice and long-term care facilities often have pets for comfort, support and recreation."

There's more on the health benefits of dog ownership at Harvard Medical School.