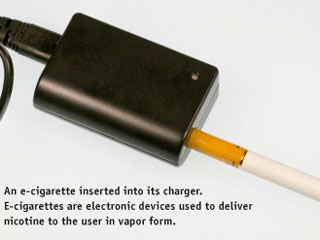 THURSDAY, May 5, 2016 (HealthDay News) -- The U.S. Food and Drug Administration said Thursday that it is banning the sale of e-cigarettes to minors, as part of its long-awaited plan to extend the agency's regulatory powers across all tobacco products.

The new rules would halt the sale of e-cigarettes and any other tobacco product to anyone younger than 18.

The regulations also would require photo IDs to buy e-cigarettes, and ban retailers from handing out free samples or selling them in all-ages vending machines.

The rules will go into effect in 90 days, the FDA said, and also cover other alternative forms of tobacco like cigars, hookah tobacco and pipe tobacco.

Electronic cigarettes are battery-operated devices designed to create an aerosol that delivers nicotine, flavor and other chemicals when inhaled by the user. Manufacturers have marketed the products as a way to help smokers quit cigarettes. But, opponents contend that the nicotine-laden e-cigarettes actually encourage people -- especially vulnerable teens -- to pick up the smoking habit.

"This final rule is a foundational step that enables the FDA to regulate products young people were using at alarming rates, like e-cigarettes, cigars and hookah tobacco, which had gone largely unregulated," Mitch Zeller, director of the FDA Center for Tobacco Products, said during a media briefing.

The FDA action earned universal praise from medical associations, which have been concerned that e-cigarettes serve as a gateway drug to draw teenagers into a lifetime of smoking addiction.

"Youth use e-cigarettes more than any other tobacco product on the market today, serving as an entry point to more traditional tobacco products and placing kids at risk to the harms and addiction of nicotine and other tobacco products," said Harold Wimmer, national president and CEO of the American Lung Association. "Ending the tobacco epidemic is more urgent than ever, and can only happen if the FDA acts aggressively and broadly to protect all Americans from all tobacco products."

E-cigarette manufacturers also will not be allowed to promote the devices as a healthy alternative to smoking, unless they provide strong scientific evidence that supports the claim, Zeller said.

For example, they cannot market e-cigarettes as having fewer toxins or posing a lower health risk than tobacco cigarettes, he said.

Studies have shown that as many as 70 percent of current adult e-cigarette users also continue to smoke tobacco cigarettes, and may be using the devices to flout indoor clean air laws, Zeller said.

"Are they losing interest in quitting cigarettes because now they can switch to an e-cigarette in those situations where it's illegal or socially unacceptable for them to light up?" he asked.

Until now, e-cigarettes and other alternative tobacco products have gone unregulated by the FDA, despite a 2009 law that granted the agency the authority to govern any tobacco sold in the United States.

Manufacturers of e-cigarettes also will be required to submit new and existing products to the FDA for review and evaluation, unless the product was sold prior to Feb. 15, 2007.

That grandfathering date means that 99 percent of all e-cigarette and "vaping" products now on the market will have to be submitted for FDA review, according to a statement by the Smoke-Free Alternatives Trade Association.

The FDA anticipates that existing e-cigarette brands will have at least three more regulation-free years on the market -- two years while manufacturers prepare their product application and another year for FDA review.

"The FDA is providing regulated entities with time to comply with these regulations," said FDA Commissioner Dr. Robert Califf.

The new regulations bring e-cigarettes and other alternative tobacco products in line with the FDA rules that already govern traditional cigarettes and smokeless tobacco, the agency said. As a result, e-cigarette manufacturers will have to:

"Today's rule is a milestone in consumer protection that marks a new chapter in our efforts to do everything we can under the law to protect Americans from the dangers of tobacco products," Califf said.

The new rule also extends to premium cigars, which the FDA had considered leaving out of its regulations.

"After a thorough review of the scientific evidence and the comments submitted, the FDA has determined that there is no appropriate public health justification for excluding premium cigars from the scope of this rule," Zeller said. "All cigars pose serious negative health risks, and contain harmful and potentially harmful constituents."

The American Academy of Pediatrics praised the new FDA rules, but criticized the agency for not going further.

"FDA passed up critical opportunities in this rule by failing to prohibit the sale of tobacco products coming in flavors like cotton candy, gummy bear and grape, or to prevent marketing tactics that target children," said AAP President Dr. Benard Dreyer.

The FDA plans to propose a separate rule in the near future that would ban flavors in little cigars, Zeller said. Flavors other than menthol already are banned in traditional cigarettes.

"If the FDA's rule is not changed by Congress or the courts, thousands of small businesses will close in two to three years," said Gregory Conley, president of the American Vaping Association. "Tens of thousands of jobs will be lost and consumer choice will be annihilated. Absurdly, ex-smokers will face the prospect of having to purchase products that help them remain smoke-free on the black market."

The Smoke-Free Alternatives Trade Association stated: "Today's final rule pulls the rug out from the 9 million smokers who have switched to vaping, putting them in jeopardy of returning back to smoking, which kills 480,000 Americans each year and costs the U.S. more than $300 billion in annual health care expenses. These new regulations create an enormously cost-prohibitive regulatory process for manufacturers to market their products to adult smokers and vapers," crippling a "multi-billion job-creating industry."