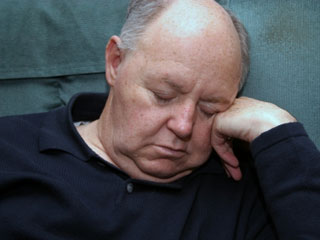 TUESDAY, May 3, 2016 (HealthDay News) -- Men who eat a lot of fatty foods may find themselves needing an afternoon nap, a new study suggests.

Researchers found that among almost 800 men aged 35 to 80, those with diets high in fat reported more problems with daytime sleepiness. The connection was not explained by body weight, exercise levels or chronic health issues, such as diabetes or depression.

The study, published recently in the journal Nutrients, does not prove that dietary fat, itself, induces drowsiness.

It's unclear why a fatty diet might affect drowsiness, according to lead researcher Yingting Cao, a Ph.D. candidate at the University of Adelaide in Australia.

According to Cao, more research is needed to understand how fatty foods might encourage drowsiness, and whether the timing of a high-fat meal matters: Does eating fat-laden food at night, for example, interfere with sleep?

The study findings are based on 784 Australian men who were surveyed about their diet and lifestyle. The men also underwent an at-home study, to detect symptoms of sleep apnea -- a nighttime breathing disorder that can cause loud snoring and daytime drowsiness.

Overall, Cao's team found, the one-quarter of men with the highest daily fat intake were more likely to complain of daytime drowsiness than the one-quarter who ate the least fat.

The researchers weighed a number of other factors -- including body weight, exercise levels, diabetes, depression, and smoking and drinking habits. And men with the highest fat intake were still 78 percent more likely to complain of drowsiness than those with the least fat in their diets.

Men who ate the most fat also had a higher risk of sleep apnea symptoms -- though that seemed to be explained by heavier body weight, the findings suggested.

In contrast, there was no clear connection between the men's carbohydrate or protein intake and problems with daytime drowsiness.

Even though the study authors tried to account for other factors that might cause drowsiness, it's difficult to pin the blame on one nutrient, according to Jim White, a registered dietitian and spokesman for the Academy of Nutrition and Dietetics.

"There are many factors that can cause daytime sleepiness," said White, who was not involved in the study.

"This study does show a relationship with increased fat intake and sleep," he said. "But we have to look at people's overall lifestyle and eating behavior, rather than pointing the finger at one macronutrient."

While it's unclear whether a high-fat diet drains a man's energy, Cao said there are already reasons to be careful about fat intake.

"Keeping a light and balanced diet is always right for anyone," she said.

White agreed on the need for balance. "The best chance of having high energy levels during the day is to incorporate a diet that consists of whole grains, lean proteins, fruits and veggies, low-fat dairy and a high-quality fat intake," he said.

The National Sleep Foundation has more on food and sleep.