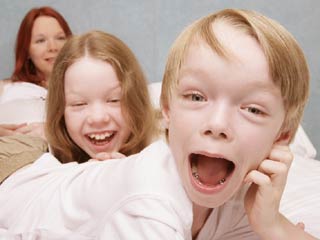 FRIDAY, April 29, 2016 (HealthDay News) -- Although older women may face more potential pregnancy complications, their children seem to fare better in some ways over the long run, a new study suggests.

Using data on over 1.5 million Swedish adults, researchers found that people born to mothers who were in their late-30s or 40s tended to be taller, fitter and more educated than those born to younger moms.

But, that doesn't guarantee that being born to an older mother means a person will be fitter, taller or more likely to aspire to a higher education. This study can only show an association between those factors.

People are choosing to give birth at later ages, the study authors said. For example, in Germany and the United Kingdom, the average age at first birth is 30 years old. And in Sweden in 2013, more than one-quarter of babies were born to women 35 and older, the report noted.

A woman who gives birth in her 40s rather than her 20s faces higher risks of pregnancy complications and problems for her baby -- including Down syndrome and autism, according to background information in the study.

But, her child is also born 20 years later in time, said researcher Mikko Myrskyla, director of the laboratory for population research at the Max Planck Institute for Demographic Research, in Rostock, Germany.

"Over a period of 20 years, most developed countries have seen strong expansion of education, improvements in health and increases in height," Myrskyla explained.

The study results are based on data from Swedish adults born between 1960 and 1991. In general, the investigators found, people who'd been born to older mothers tended to have higher grades in high school and were more likely to go to college, versus those born to moms younger than 30.

But the pattern seemed to be entirely explained by the time period in which a person was born, according to Myrskyla.

There was a similar pattern when the researchers looked at adulthood height and fitness levels -- which, they say, are "good proxies" for overall health. Based on data from the Swedish military draft, young men born to mothers in their late 30s or early 40s tended to be slightly taller and more fit. But again, that was likely related to being born in a later time period, the study authors explained.

An expert who wasn't involved in the study agreed that being born during "certain times in history" can give people certain advantages -- such as a greater likelihood of going to college.

But that shouldn't drive any woman's family-planning decisions, stressed Brenda Volling, director of the Center for Human Growth and Development at the University of Michigan, in Ann Arbor.

A woman in her 40s is far less likely to have a baby at all, compared with a woman in her 20s, Volling pointed out.

"We know that fertility rates decline significantly once women turn 35," she said. "There are no positive benefits to be had if there is no child to be born."

Volling said the women in this study who were able to give birth in their 40s were "probably a very select group."

These women were likely very healthy and gave birth to "robust" babies, Volling said. "When these two things are in place, then children may have a chance to experience some positive outcomes if the societal resources are in place," she added.

Myrskyla agreed that no one should use this study in their family planning. "We are not making any recommendations on when to have children, or whether to have them at all," he stressed.

Instead, he said, the findings suggest that when older women do have a healthy baby, that child may enjoy certain advantages from being born later.

Findings from the study were published recently in the journal Population and Development Review.

The American College of Obstetricians and Gynecologists has more on having a baby after age 35.