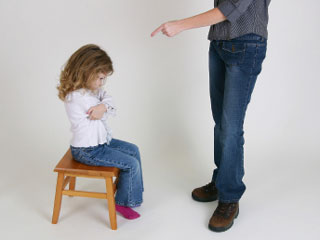 (HealthDay News) -- Spare the rod and spoil the child?

Not so fast, suggests a new review that found spanking doesn't produce better behavior and may set up a child for psychological and learning problems later.

"Spanking is not achieving parents' goals," said lead researcher Elizabeth Gershoff, a developmental psychologist at the University of Texas at Austin. "Children have more mental health problems the more they are spanked. They have lower cognitive ability, scoring lower on achievement tests."

Another child development expert said the study findings, based on an analysis of five decades of research, should give parents pause when it comes to corporal punishment.

"Parents need to reconsider the role of spanking in the disciplining of children," said Dr. Jefry Biehler, chair of pediatrics at Nicklaus Children's Hospital in Miami. "I think this is a pretty good study that supports the idea there is no positive outcome from spanking of children."

While the research doesn't prove cause-and-effect, Gershoff said, "It shows a correlation with negative outcomes. If it were good, we would have [found] correlations in the other direction. But the correlations are all negative."

In the review, Gershoff and her colleague, Andrew Grogan-Kaylor, an associate professor of social work at the University of Michigan, analyzed 75 studies that examined spanking. The aim was to determine the effects -- both immediate and long-term -- of spanking a child.

They only looked at spanking that involved "a swat on the behind with an open palm," Gershoff said, and not spanking that was done with an object such as a paddle. All of the studies were published between 1961 and 2014, and more than 160,000 children were included in the analysis.

The researchers found that spanking was linked with 13 of the 17 outcomes they examined, and all were negative. The outcomes included levels of aggression, mental health problems and lower thinking skills, among others.

Still, 80 percent of parents worldwide spank their children, according to background information in the study. In the United States, Gershoff said, the percentage is slightly higher, about 85 percent, citing a recent national survey.

Advocates contend that spanking is an effective form of discipline, using the reasoning that they were spanked as children and turned out fine.

However, the American Academy of Pediatrics advises against physical punishment.

Gershoff said most parents become frustrated at times with their children's behavior, and most at some point feel like "they want to hit them. But there is never a reason to do it. There are always better ways to communicate our frustration," she said.

Gershoff cited this example: When a child doesn't share a toy and hits his sibling with it, give attention to the hurt child first, she suggested, then tell the other child it's not OK to hurt people. Either take the toy away for a specified period or tell him if he plays well with his sibling for the next half hour he may earn the toy back.

Biehler agreed that alternative methods such as timeouts and discussions are better than spanking. He also suggested parents consult with their pediatrician, who knows their child, for other ideas.

The study findings were published in the April issue of the Journal of Family Psychology.

Click here to learn more about the American Academy of Pediatrics' advice on spanking.