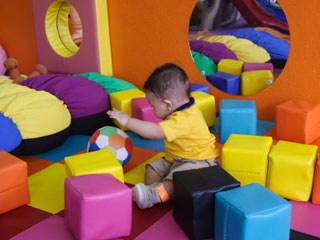 (HealthDay News) -- Babies in day care catch their first stomach bug earlier than home-based infants, but end up getting fewer of these gastrointestinal illnesses during their preschool years, new research suggests.

Analyzing a group of more than 2,200 children -- 83 percent of whom attended day care before age 1 -- Dutch scientists found a 13 percent higher rate of so-called acute gastroenteritis, or "stomach flu," in day care children in their first two years.

Later on, however, day care kids seemed to enjoy a protective effect from their early virus exposure, and suffered fewer stomach bugs from ages 3 to 6 years than peers who hadn't attended day care.

"Day care does influence the timing of [gastroenteritis] but does not increase [its] overall burden," said study author Marieke de Hoog, a postdoctoral researcher in public health epidemiology at University Medical Center Utrecht in the Netherlands.

"It's even possible that the protective effect persists beyond 6 years of age," she added. "However, more research is needed to support that."

The study was published online April 25 in the journal Pediatrics.

Typically involving vomiting and/or diarrhea, stomach bugs usually aren't dangerous. But gastroenteritis accounts for about 300 deaths in children under age 5 in the United States and more than 1.5 million outpatient medical visits each year, according to 2007 research.

Nearly one-quarter of American children under age 5 attend some type of organized child care, including day care centers and nursery schools, according to the Center for American Progress, an independent policy institute.

Led by de Hoog, researchers examined data from a large group of children under age 6 in the Netherlands between 2001 and 2012. They found that first-year day care attendees suffered a higher rate of stomach viruses in their first two years, but lower rates from ages 3 to 6 than children cared for at home.

Dr. Jennifer Lan, a pediatrician in Memphis, Tenn., said, "We kind of always know that children who go to day care get more infections than those that don't, just because they're so closely exposed to other kids." Lan was not involved in the new research.

"We get a lot of families who bring kids in thinking something is wrong with their immune systems because they go to day care and get sick every single month," Lan added. "We tell parents that it's kind of a rite of passage to build up antibodies to these viruses. Kids will be exposed to them no matter what -- it just happens earlier if they go to day care."

The wintertime peak of gastroenteritis among day care infants under age 1 is consistent with seasonal peaks in rotavirus and norovirus, two highly contagious gastrointestinal viruses causing vomiting and diarrhea, according to the study.

Dr. Stephen Eppes, vice chair of pediatrics and director of pediatric infectious diseases at Christiana Care Health System, in Wilmington, Del., said a rotavirus vaccine has been available in the United States for about a decade, but only about 70 percent of American children have been immunized with it.

The body builds up at least a partial immunity to such viruses and bacteria after suffering from illness, said Eppes, who wasn't involved in the new research.

"But it's not like chickenpox, where you have it once and basically you have lifelong protection," he added. "You may get it again, but usually subsequent cases are milder."

He suggested that day care centers and preschools take common-sense precautions to deter the spread of stomach and other viruses among children, such as disinfecting surfaces and promoting frequent hand-washing.

The American Academy of Pediatrics has tips for handling gastroenteritis.