Alzheimer's can steal ability to know loved ones' faces

Alzheimer's can steal ability to know loved ones' faces 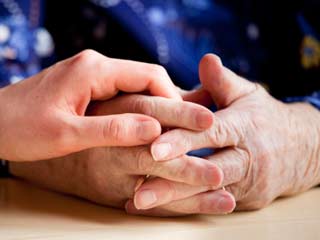 (HealthDay News) -- A new study sheds light on what is often called one of the cruelest effects of Alzheimer's disease -- the patient's inability to recognize loved ones.

The investigators tested a group of seniors with Alzheimer's, and a "control" group without the brain disease, to see how well they could perceive faces and cars in photos. The pictures were shown either upright or upside down.

"The results for people with Alzheimer's were similar to those in the control group in terms of answer accuracy and the time to process the upside-down faces and cars," study author Sven Joubert, from the University of Montreal, said in a school news release.

"To perform these tasks, the brain must perform a local analysis of the various image components perceived by the eye. However, with the upright faces, people with Alzheimer's were much slower and made more mistakes than the healthy individuals," Joubert explained.

The researchers were also surprised to find that this visual impairment occurs in the early stages of the disease.

The study could help family members of Alzheimer's patients better understand their loved one's inability to recognize them and may lead to new ways to delay this problem, the study authors said.

For example, because impaired facial recognition may be due to a visual perception problem -- and not a general memory problem -- strategies such as voice recognition might help Alzheimer's patients recognize loved ones for a longer time period, the researchers said.

The findings were published April 12 in the Journal of Alzheimer's Disease.

The U.S. National Institute on Aging has more about Alzheimer's disease.