Moderate drinking may not lengthen life

Moderate drinking may not lengthen life 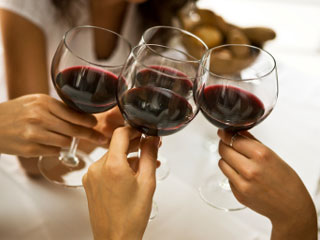 (HealthDay News) -- Despite previous studies suggesting a bevy of health benefits, a new analysis challenges the idea that drinking alcohol in moderation might prolong your life.

After reviewing nearly 90 previously completed studies, researchers said that moderate drinkers may not have a survival benefit compared to people who don't drink at all.

"So-called 'moderate' drinkers do not live longer than nondrinkers," said review co-author Tanya Chikritzhs. She is a professor and director of the Alcohol Policy Research team at Australia's National Drug Research Institute.

Not everyone agrees with that conclusion, but some health experts do.

"Scientific data continue to support the premise that small to moderate amounts of alcohol on a regular basis are consistent with a healthy lifestyle for middle-aged and older adults," said Dr. R. Curtis Ellison, professor of medicine and public health at Boston University School of Medicine.

Chikritzhs and her colleagues contend that previous reviews missed an important limitation: People who abstain from drinking often do so because they're ill. As a result, the researchers said, abstainers are more likely to die earlier, a fact that can throw off findings about the influence of alcohol consumption on life span.

In the new review, the researchers examined 87 studies and removed those that didn't take into account the fact that abstainers may avoid drinking due to illness. After the study authors "corrected" this issue, Chikritzhs said, they found no sign of a life span benefit from moderate drinking.

In addition, she said, "among people who drink, it was actually the 'occasional' drinkers -- those who drank less than a drink every 10 days or so -- who did the best." But, she added, this finding appears to be a statistical fluke because that isn't enough alcohol to influence health.

In addition, she said, "It is becoming clearer that it is much more likely to be the case that being a low or moderate drinker in middle age or older is a marker of good health, not a cause of it."

In the big picture, Chikritzhs said, "alcohol is a legal substance that many people enjoy, and that's fine. But when it comes to health or thinking of alcohol as some sort of 'medicine,' even low doses are unlikely to prevent death."

And, she said, when you consider its potential for addiction and negative effects when used to excess, "for most folks, when it comes to health, drinking less is better."

Ellison said the new review was biased and "does not stand up" to the vast research in this area. "Anytime you have to rely on humans to tell you what they actually drink, there is always the chance that there will be mistakes in their reporting," he said.

Experiments involving people and animals show that "small amounts of an alcoholic beverage, especially wine, are associated with less atherosclerosis [clogged arteries] and coronary heart disease -- even in rats, mice and pigeons," he said.

Jurgen Rehm, professor and chair of Addiction Policy with the University of Toronto's Dalla Lana School of Public Health, agreed that experiments show beneficial effects from alcohol. However, he said, even a single drink can boost some risks, such as that of breast cancer -- thus, canceling out the benefit.

"If people drink only one drink a day," he said, "it is a wash. There are much better ways to get health benefits."

The new review appears in the March issue of the Journal of Studies on Alcohol and Drugs.

For more about the health effects of alcohol, try the U.S. National Institute on Alcohol Abuse and Alcoholism.