Could too much cellphone time signal anxiety, depression?

Could too much cellphone time signal anxiety, depression? 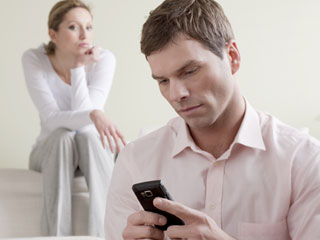 TUESDAY, March 15, 2016 (HealthDay News) -- Some young adults who constantly reach for their smartphones might be anxious or depressed, preliminary research suggests.

A study of more than 300 college students found heavier technology use was tied to greater risk for anxiety and depression, particularly among those using the devices as a "security blanket" -- to avoid dealing with unpleasant experiences or feelings.

Risk was not elevated, however, among young people who used smartphones simply to "escape boredom" or for entertainment, said the researchers from the University of Illinois at Urbana-Champaign. Nor were the devices themselves found to cause mental health problems.

"Handheld devices, with their countless applications and entertainment options and their constant presence at our fingertips, make it easier than ever before to disconnect with the problems [and] stresses of reality, and avoid actively engaging with them," noted study co-author Tayana Panova.

"But over time," she said, "turning to the device whenever an uncomfortable situation or feeling arises can become an escapist pattern of behavior, and may make people more vulnerable to stressors due to insufficient emotional 'exercise.'"

For now, however, "the causation of the effect is unknown," said Panova, who conducted the study for her undergraduate honors thesis.

The findings will be published in the May issue of Computers in Human Behavior.

Nearly 5 billion people use mobile phones worldwide, while the Internet is accessed by 3 billion users, the researchers said in background notes.

To explore how smartphone habits relate to mental health, the authors conducted a two-part study. First, they evaluated responses to a questionnaire about technology use and emotions, which was completed by 318 undergraduates.

Then, to examine cellphone use in a stressful situation, the team asked 72 students to spend five minutes writing about a personal flaw or weakness that made them uncomfortable. The anxiety-provoking writings were collected, under the false premise that they would be reviewed as part of a 10-minute psychology training exercise.

While the "review" was underway, one-third of the participants had no access to any technology; another third had access only to their cellphones; while the remaining third only had access to a simple computer game.

Those allowed to use their cellphones were found to have the lowest anxiety levels. They were 64 percent more likely to not experience anxiety than those with no technology access, the researchers said.

Among those in the cellphone group who did experience anxiety, 82 percent used their phones the entire waiting period. By comparison, only about half of anxious gaming participants played computer games the whole time.

Looked at in reverse, among those with cellphone access who didn't feel anxious, only about half turned to their phones through the whole waiting period. And only one-quarter of anxiety-free gaming members played games throughout.

The investigators concluded that cellphones served as a kind of "security blanket" with "unique comforting capabilities."

Still, the effect was relatively weak and short-lived, Panova and her co-author concluded.

Panova suggested that relying on cell phones to relieve anxiety may end up undercutting the development of more effective coping skills.

But the device itself is not problematic, she said. "It is the motivations for its use, and the manner in which it is used, that determine whether the user will experience negative consequences from it," she added.

That point was seconded by Joe Bayer, who is finishing a Ph.D. in communication studies before beginning as an assistant professor at Ohio State University.

"It's very important that readers not take away the idea that smartphones cause negative psychological conditions," he said.

"Neither this research," Bayer added, "nor the larger body of research suggests such a negative, causal effect. There were will always be anxious people, and these people are likely to use technologies in ways that reflect -- and maybe amplify -- these underlying conditions."

There's more on stress at the U.S National Institute of Mental Health.