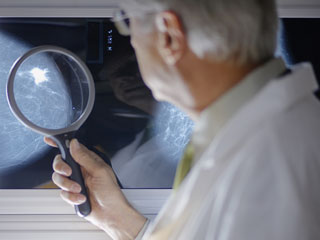 (HealthDay News) -- For women with early stage breast cancer, targeted doses of radiation therapy may be as effective as standard radiation treatment of the entire breast, a new British study suggests.

The research only tracked women for five years, so it isn't definitive. Still, "this contributes to a growing body of evidence that a large proportion of women over 50 years old with small breast cancers can avoid whole breast radiotherapy," said study co-author Dr. John Yarnold. He is a professor of clinical oncology with the Institute of Cancer Research in London.

At issue: What is the best treatment for low-risk early breast cancer?

Many studies have shown that surgery to remove the cancerous lump -- but not the entire breast -- followed by radiation of the whole breast reduces the chance of breast cancer returning, said Dr. Reshma Jagsi, who was not involved with the new study. Jagsi is an associate professor in the department of radiation oncology at the University of Michigan Health System.

But side effects can include breast shrinkage, firmness and tenderness, Yarnold said. That raises the question of whether partial radiation could be a better option.

The researchers behind the new study randomly assigned just over 2,000 women with breast cancer in the United Kingdom to undergo one of three radiation therapy approaches after having small cancerous tumors surgically removed. Two of the approaches focused the radiation around the tumor, exposing the rest of the breast to little or no radiation.

According to Yarnold, the study revealed that three weeks of partial breast radiation therapy produced fewer side effects but seemed just as effective as whole breast radiation over five years.

Besides very low rates of relapse among all three groups, the rate of side effects from the target therapy was minimal, the study authors said.

But Yarnold and Jagsi disagree over whether doctors should embrace the more limited form of radiation treatment now.

Yarnold predicted that partial breast radiation treatment will become standard for large numbers of women with breast cancer over the next five years.

But he cautioned that the treatment isn't appropriate for all patients. Physician opinions vary, he said, but in general, the treatment seems best for women over 50 with low- to medium-grade tumors who've had the entire primary tumor removed and didn't show signs of the cancer spreading to axillary nodes (lymph nodes in the armpit region).

The findings are promising, said Jagsi, who added that the technology to deliver partial breast radiation is available in the United States.

However, the study isn't strong enough to warrant changing the traditional approach, at least for women with longer life expectancies, Jagsi said. More follow-up is needed to determine whether less radiation is effective over the long term, she added.

In the case of this ongoing study, additional results will be reported in another five years.

For now, "physicians and patients should have detailed discussions about the expected risks and benefits of radiotherapy in each particular case," Jagsi said. "Many approaches to radiation treatment are now available, and informed deliberation and discussion of this and many other relevant studies is necessary to ensure that each patient can select the approach that is right for her."

The study was scheduled for presentation Wednesday at the European Breast Cancer Conference in Amsterdam, Holland. Studies presented at conferences are usually considered preliminary because they haven't gone through the peer-review process required by major medical journals.

For more about radiation therapy for breast cancer, see the American Cancer Society.