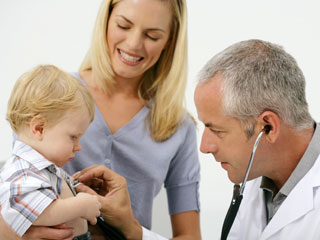 Poverty can significantly harm a child's health, according to a new American Academy of Pediatrics policy statement.

The group says pediatricians can identify children at risk by asking parents a single question: "Do you have difficulty making ends meet at the end of the month?" Those who answer "yes" can then be directed to appropriate community resources.

"Pediatricians are dedicated to preventing illness in children and intervening early when there is a problem," Dr. James Duffee, one of the authors of the policy statement, said in an academy news release.

"Because poverty so strongly influences children's health and development, pediatricians are asking about poverty-related stress so we can connect families to resources in their communities," he explained.

Studies show that severe and persistent poverty can lead to major lifelong health problems such as infant death, poor language development, and increased risk of asthma, obesity and injuries, according to the policy statement.

There is also growing evidence that childhood poverty is associated with high levels of stress that can change gene expression and brain function, and contribute to behavioral problems and chronic heart and mental health disorders, the statement added.

Census data from 2014 shows that 1 in 5 U.S. children younger than 18 lives in poverty. When families classified as poor, near poor or low-income are included, the child poverty rate rises to 43 percent, or more than 31.5 million, according to the academy.

"We know that poverty-related conditions can take a significant and lasting toll," report lead author Dr. John Pascoe said. "But we also know there are effective interventions to help buffer these effects, like promoting strong family relationships, which cause positive changes in the body's stress response system and the architecture of the developing brain."

The academy also called for expansion of state and federal anti-poverty and safety net programs. Additionally, it urged pediatricians to support policies that increase access to health care, healthy food and safe and affordable housing.

"Poverty is everywhere. It affects children of all backgrounds and in all communities," Dr. Benard Dreyer, academy president, said in the news release.

Although cities and rural communities continue to have high rates of poverty, the suburbs have witnessed large increases in poverty since the 2008 recession, the news release noted.

The policy statement and an accompanying report were published online March 9 in Pediatrics.

The Children's Defense Fund has more about child poverty.