Candidates with more 'mature' faces may get older people's votes

Candidates with more 'mature' faces may get older people's votes 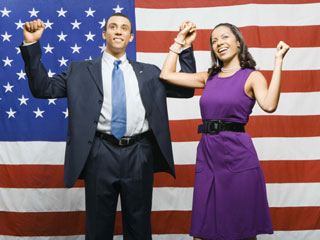 (HealthDay News) -- Is there something about Donald Trump's face that's winning Republican presidential primary votes? Or Hillary's or Bernie's on the Democratic side?

The answer may depend on the age of the voter, a new study suggests.

Research has shown that voters gravitate towards politicians who look more competent, but this tendency is stronger among younger adults, according to a small study published March 1 in the journal Cogent Psychology.

Participants were asked to rate the candidates in terms of competence, trustworthiness, attractiveness and "babyface."

Understanding this difference between older and younger voters is important since older people are more like to get out to the polls, the study authors said.

"We found that as people age, they prefer different facial characteristics in politicians. As one might expect, older adults prefer mature-looking faces," Dr. Robert Franklin, of Anderson University, said in a journal news release.

"However, younger adults did not prefer mature or babyish candidates, but they were much more likely to vote for candidates that they thought looked competent-looking," Franklin said. "These findings are very important in understanding how aging affects voting behavior generally, especially as older adults are a critical voting population."

The study has limitations, among them its small size. But the findings may offer food for thought as the U.S. presidential election unfolds this year.

The American Psychological Association provides more information on the psychology of voting.