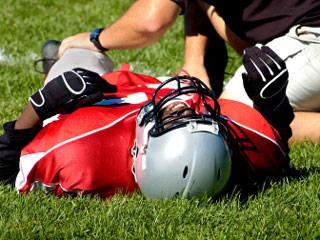 Young athletes with loose helmets had the highest rates of concussion symptoms, such as drowsiness, hyper-excitability and sensitivity to noise. Their concussions also lasted longer and were more severe, the study found.

"There's been a lot of interest in concussions but there really hasn't been much focus on how helmets fit," Boden added. "So we thought this study would be unique and original, and wanted to see if there were any issues that contributed to concussions."

Boden's research is scheduled to be presented Friday at the annual meeting of the American Academy of Orthopaedic Surgeons in Orlando, Fla. Studies presented at meetings typically haven't been peer-reviewed or published, so the results are considered preliminary.

Concussion is a mild form of traumatic brain injury. These injuries can be caused by a jolt, bump or blow to the head, according to the U.S. Centers for Disease Control and Prevention.

Concussions are caused by sports injuries as well as car accidents, falls and other trauma. Symptoms include headaches, memory and thinking difficulties, and emotional and sleep disturbances, according to the CDC.

But, Boden said it wasn't yet clear how effective the rule might be.

The lingering effects of football-related concussions have also dominated discussions about the safety of professional and college football.

Football players with improperly fitting helmets who suffered concussions had much higher rates of drowsiness, hyper-excitability and noise sensitivity than those with helmets that fit correctly. Helmet fit was determined by an athletic trainer, the study authors said.

In addition, the study found that players with concussions who were wearing helmets lined with an air bladder had higher rates of light and noise sensitivity. They also had concussions of longer duration, compared to players with foam- or gel-lined helmets, the study revealed.

Helmets lined with air bladders can deflate, leaving it looser on the head, according to the study researchers.

Dr. Mark Riederer, a sports medicine expert who wasn't involved with the new research, said all high schools should have athletic trainers who can check the fit of football helmets before players take the field.

"I wouldn't necessarily rely on coaches, kids or parents to check that," Riederer said. He's a clinical assistant professor of pediatric orthopaedic surgery and sports medicine at the University of Michigan Health System in Ann Arbor.

"If your head is not secured well in the helmet itself... it doesn't surprise me that you'd have a higher concussion severity," Riederer said.

Learn more about helmet fit and safety from the U.S. Centers for Disease Control and Prevention.