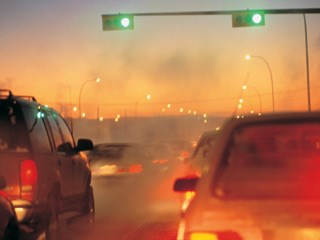 Both short- and long-term exposure to pollution from vehicles was linked to a higher risk of preterm birth in women with asthma. This was especially true when women were exposed to pollutants just before conceiving, in early pregnancy and the last six weeks of pregnancy, the study found.

"Preterm birth is a major public health problem in this country, affecting more than one in 10 infants born in the United States," said study author Pauline Mendola, an investigator at the U.S. National Institute of Child Health and Human Development. Preterm birth is considered to be a birth before 37 weeks of pregnancy.

"Our study found that air pollution appears to add to the preterm birth risk faced by women with asthma. These findings set the stage for further studies designed to help prevent preterm birth in this at-risk group," she added in an agency news release.

However, the new study only found a link between traffic pollution and preterm birth in this group of women. It did not prove a cause-and-effect relationship.

Asthma affects about 9 percent of women of reproductive-age in the United States. It is known to increase the risk of pregnancy complications and health problems in infants, the study authors said.

The study included data from more than 223,000 single-child births. The babies were born at 19 hospitals across the United States between 2002 and 2008. The researchers also examined air quality data in the regions around the hospitals. They measured six types of pollutants, including nitrogen oxide and carbon monoxide exposure.

An increase in nitrogen oxide exposure in the three months before pregnancy was linked to a higher risk of preterm birth. The increase in risk was higher for women with asthma than those without the airway disease, the study found.

Higher levels of carbon monoxide exposure during the same period raised preterm birth risk by 12 percent for women with asthma, but had no effect on those without asthma, the study said.

The researchers also found that exposure to high levels of particulate-matter air pollution was associated with higher risk of preterm birth in women with asthma. Particulate matter consists of tiny particles of substances such as metals, dust and acids, the researchers said.

She added that early exposure to air pollution may set off inflammation or other internal stresses. These problems could affect the development of the fetus and lead to preterm delivery down the road.

The study was published online March 1 in the Journal of Allergy and Clinical Immunology.

The U.S. Centers for Disease Control and Prevention has more on preterm birth.