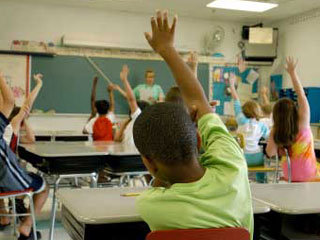 (HealthDay News) -- Students who have attention deficit hyperactivity disorder (ADHD) often get into trouble for fidgeting in the classroom, but that fidgeting may help them learn, new research suggests.

"The prevailing view has been and continues to be that hyperactivity is a core deficit in ADHD," said study author Michael Kofler, an assistant professor of psychology at Florida State University in Tallahassee. "When we think of it as a deficit, we are saying it's a bad thing and it's interfering [with schoolwork]. Our work has been challenging that thought."

Kofler's team gave 25 boys and girls with ADHD, aged 8 to 12, a series of working memory tasks, observing the amount of fidgeting as the children did them. In one set, the students had to remember where a series of dots appeared on a screen and then reorder them mentally, based on color. They had to then remember a series of numbers and letters, mentally reordering them, numbers first from smallest to biggest, then the letters.

The children fidgeted during all the tests, but fidgeted about 25 percent more when they couldn't predict how many items they would have to remember. The tests were alike in every other way, so Kofler said this shows that demands on working memory affect the level of hyperactivity in ADHD students.

The fidgeting may increase "physiological arousal," Kofler speculated, similar to what stimulant medication does for a child with the disorder. But the study didn't prove that point, he said, and the researchers don't know if the kids were fidgeting on purpose.

The study was published online this month in the Journal of Attention Disorders.

The findings echo some from a study published last year from the University of California, Davis. Researchers there looked at 26 children with ADHD and 18 without. They found that when the children with ADHD fidgeted more, they did better on a test. Fidgeting among kids without ADHD had no effect on test performance.

Dr. Trevor Resnick, a pediatric neurologist at Nicklaus Children's Hospital in Miami, said, "We've known [intuitively] for many years that kids with ADHD often do better when they are fidgeting."

However, Resnick said, the interpretation of why they fidgeted more has not been proven. "We don't know whether they do it to help or because they are anxious, or whether it is helping," he said.

Kofler agreed, saying his team next plans research "to link the movement with the arousal and the performance, to see if we are right about that is why the movement is helpful."

Meanwhile, until more is known, students with ADHD should not have free rein to do what they want in the classroom, Kofler said.

But the new study does suggest that teachers and parents should focus less on whether a child is sitting still and more on whether the work is getting done, regardless of the movement level, he said.

To learn more about ADHD, visit U.S. Centers for Disease Control and Prevention.