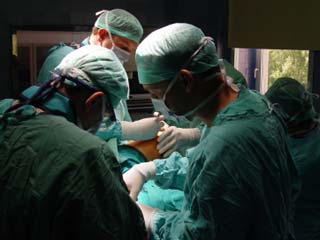 The transplanted uterus came from a deceased donor, and the 26-year-old recipient was in stable condition following the nine-hour procedure, her doctors said Thursday.

Women who might be candidates for such a transplant have ovaries but were either born without a uterus, have lost it or have suffered irreversible uterine damage, the hospital explained. The condition, called uterine factor infertility, affects 3 percent to 5 percent of women worldwide.

One expert not involved in the procedure said it was a real advance for these patients.

"The procedure is groundbreaking for the United States," said Dr. Anthony Vintzileos, head of obstetrics and gynecology at Winthrop-University Hospital in Mineola, N.Y. "In Europe, the procedure has not only been technically successful, but has also enabled women to complete successful pregnancies," he said.

"This is real progress and great news for women with no uterus who desire to carry their own children," Vintzileos added.

Sweden, the world leader in uterus transplants, reported the first successful birth via womb transplant in 2014. As of last September, nine transplants had been performed in that country, resulting in five pregnancies and four births. In Sweden, however, live donors are used.

The current patient, who was not identified, must wait a year before attempting pregnancy, according to published reports. That should give doctors time to adjust medication needed to prevent organ rejection. Previously, doctors removed her eggs, fertilized them with her husband's sperm and froze them for future use.

The hospital said it plans to provide more details next week.

Unlike many organ transplants, which are life-saving, a womb transplant is considered "life-enhancing," Cleveland Clinic doctors explained.

Also, womb transplants are not intended to be permanent. After one or two babies are born, anti-rejection drugs taken by the mother can be discontinued. Then, the womb can be removed or allowed to disintegrate, the hospital explained.

When he learned of the ground-breaking program last year, Dr. Tomer Singer, a reproductive endocrinologist at Lenox Hill Hospital in New York City, said this new procedure would allow "women to carry their own genetic child without the use of a gestational carrier (surrogate), which can be financially and emotionally taxing."

This transplant trial "opens the door to an innovative and promising advancement within reproductive medicine," he added. "We believe that tens of thousands of women will benefit from this advancement in the future, while realizing that there are still challenges to overcome before we offer this procedure routinely."

Singer said the most significant hurdles include "side effects to both the mom and the fetus from required anti-rejection medication, as well as maintaining a normal blood supply during the procedure and for nine months after to allow for healthy growth of the fetus."

Find out more about uterine health issues at the Agency for Healthcare Research and Quality.