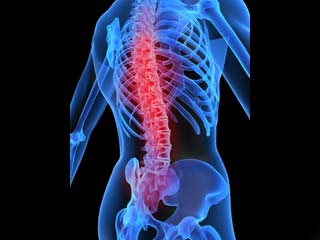 Called intradiscal biacuplasty (IDB), the procedure uses two water-cooled needles to blast radiofrequency energy at the nerve fibers within and around a spinal disc that's begun to degenerate but has not ruptured, explained lead researcher Dr. Michael Gofeld.

"Basically you're destroying the nerve fibers, which will lead to the elimination of pain," he said. Gofeld is a chronic pain management specialist at St. Michael's Hospital and Women's College Hospital in Toronto.

A year out from treatment, half of the patients who received IDB in the study said they still were experiencing significant pain reduction, Gofeld and his colleagues reported.

The treatment is specifically to help people with discogenic back pain, Gofeld said -- pain related to discs that are deteriorating but have not ruptured.

Prior studies have found that discogenic back pain accounts for 39 percent of cases of chronic lower back pain, he said.

The idea of using radio waves to treat back pain has been around for a quarter-century, Gofeld said. But recent breakthroughs using water-cooled needles have made the technology potentially more effective.

"If the needle gets too hot, the energy will not spread efficiently enough," Gofeld said.

The procedure takes about a half hour, followed by six weeks of physical therapy, he said. Ideal patients have lower back pain that doesn't shoot down the legs and limited disc degeneration, with no significant tears or ruptures.

Dr. John Mafi, an internist and assistant professor at UCLA's David Geffen School of Medicine, in Los Angeles, pointed out that the U.S. Food and Drug Administration approved IDB for use in 2007. But the technology has not been widely adopted in the United States, he said.

"It's not widely used," Mafi said. "Insurance doesn't seem to cover it yet, and that may be because they want to see more evidence."

For example, the U.S. Centers for Medicare and Medicaid Services (CMS) ruled in September 2008 that the government insurance plans would not cover any radiofrequency treatments for low back pain. The CMS decision memo concluded that there wasn't enough evidence to prove that the procedures would improve health outcomes.

Gofeld's study, which was funded by device manufacturer Kimberly-Clark Corp., focused on 22 patients who received IDB treatment alongside typical medical care for back pain.

The one-year report also included 25 members of the initial control group for the study, who at first only received typical medical care that included physical therapy and exercises.

These patients were allowed to "cross over" after six months and receive IDB. They also experienced some pain relief and improved function, the Canadian researchers reported.

However, their pain reduction was not as strong as that experienced by the original treatment group, Gofeld said.

"We can infer from this result that the sooner we do the procedure and get the patient into rehabilitation treatment, the better will be the result," he said.

Researchers also found no significant side effects associated with IDB.

The findings were presented Feb. 19 at the American Academy of Pain Medicine's annual meeting in Palm Springs, Calif. Research presented at meetings should be viewed as preliminary until published in a peer-reviewed journal.

Mafi said the small number of patients involved makes this more of a "pilot study."

"I wouldn't jump to any changes in policy based on this study," Mafi said. "This is a promising start, but now it's time to do a rigorous clinical trial from this pilot data."

Dr. Nathaniel Tindel, an orthopedic spine surgeon at Lenox Hill Hospital in New York City, also sounded a cautious note, based on both the small number of participants and the fact that numerous prior radiofrequency treatments have failed to help people with low back pain.

"Whenever there are a plethora of procedures offered to treat a condition which is known to heal best when left alone, those procedures are either all very effective or equally ineffective," Tindel said. "Unfortunately, medical research has already shown us that intradiscal therapy falls into the latter category, and to date has not been shown to have long-term effect on back pain and disc disease."

For more on thermal intradiscal procedures for back pain, visit the U.S. Centers for Medicare and Medicaid Services.