Americans hold science in high regard

Americans hold science in high regard 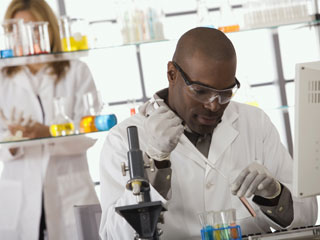 According to the survey, Americans are more likely to have "a great deal of confidence" in leaders of the scientific community than leaders of any group other than the military.

A large majority of the more than 1,500 respondents to the National Science Foundation poll believe the benefits from science outweigh any dangers, and that science and technology will create new opportunities for future generations.

About 80 percent of the poll participants said scientific research requires funding from the government, 40 percent said the United States is spending too little on such research, and 10 percent said too much money is spent on science.

Nearly half the respondents said the Internet was their primary source for science and technology information, compared to about 10 percent of Americans in 2001.

While only about half of the respondents expressed concern about climate change, the majority support an emphasis on alternative energy sources over fossil fuel development.

Knowledge of science among the general public in the United States has remained about the same in recent years, according to the poll. It was conducted as part of a National Science Board report prepared every two years for the president and Congress.

Report co-author John Besley, an associate professor in the advertising and public relations department at Michigan State University, recently presented key parts of the poll at the annual meeting of the American Association for the Advancement of Science.

"It's helpful for Americans to maintain a high regard for science and scientists," Besley said in a university news release. "Confidence in scientists should make it more likely that society will see benefits from science."

The Pew Research Center offers a science and technology quiz.