Risk of preemie birth may rise for depressed parents-to-be

Risk of preemie birth may rise for depressed parents-to-be 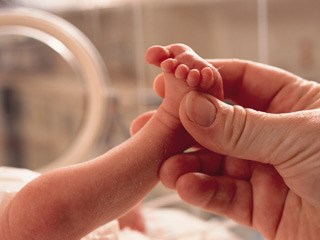 (HealthDay News) -- It's known that an expectant mother's mental and emotional health can affect her baby. New research, however, finds that depression in either the father or the mother may be linked to an increased likelihood of preterm birth.

Screening for and treating mental health problems in both parents may help reduce the odds of a preterm delivery, according to study author Dr. Anders Hjern and his colleagues.

"Depressive fathers influence the stress hormone balance in the mother, and depression may also -- but this is more speculative -- have an effect on sperm quality," said Hjern, professor of pediatric epidemiology with the Centre for Health Equity Studies in Stockholm, Sweden.

Hjern and his colleagues analyzed more than 360,000 births in Sweden between 2007 and 2012. They determined parental depression by prescriptions for antidepressants that the expectant parents were taking. The researchers also looked at the parents' outpatient and hospital care. All this information was from 12 months before conception until six months after conception.

Mothers who had either a first bout with depression or recurring depression appeared to have a 30 percent to 40 percent higher risk of delivering a baby moderately preterm -- at 32 to 36 weeks. Full term is 39 to 40 weeks, according to the American Congress of Obstetricians and Gynecologists (ACOG).

For expectant fathers, only those who had "new" depression were linked to a greater risk of a preterm child. (People with new depression had no depression 12 months prior to their diagnosis.) These fathers had a 38 percent higher risk of a very preterm baby, defined as 22 to 31 weeks, the study authors said.

However, the study authors only found an association, and not cause-and-effect proof, that parental depression may affect a child's birth outcome.

Janet Currie, director of the Center for Health and Wellbeing at Princeton University, said stress can certainly be a culprit in causing early delivery.

"There is quite a bit of literature suggesting that stress could trigger labor," said Currie, who was not involved with the new research. "Possibly paternal depression could also have that effect on the mother, for example, if she is stressed out by a father's health problem, or if a father's depression leads to other stresses like loss of employment or income."

Hjern theorized that the effects of antidepressants and unhealthy factors such as obesity and smoking also may contribute to a greater likelihood of preterm labor.

Some experts recommend that couples planning a family or expecting a child seek advice if they are experiencing irritability, anxiety or a change in mood.

Hjern expressed concern that men are less likely to seek professional help for any mental health problems, suggesting a proactive approach toward targeting the well-being of expectant fathers may be beneficial.

ACOG applauded the recommendation, saying "routine screening by physicians is important for ensuring appropriate follow-up and treatment." Treatment might include lifestyle changes, therapy and/or medication, the association said.

"Perinatal depression or depression that occurs during pregnancy or in the first 12 months after delivery is estimated to affect one in seven women, making it one of the most common medical complications associated with pregnancy," ACOG said in a statement.

The new study was published online recently in BJOG: An International Journal of Obstetrics and Gynaecology.

The U.S. National Institute of Mental Health details the signs of depression.