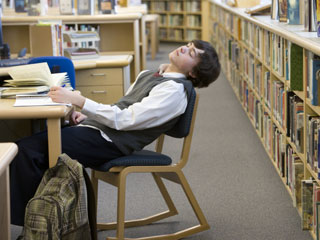 (HealthDay News) -- Teen boys who get too little of a particular type of sleep may be at risk of developing type 2 diabetes, a new study suggests.

The research focused on "slow-wave sleep" -- an important stage of sleep that helps people store memories and recover after sleep deprivation. This type of sleep is also associated with lower levels of the stress hormone cortisol and reduced inflammation, the study authors explained.

For the study, 700 children were assessed between the ages of 5 and 12. Just over half of the participants were boys. The investigators followed up with about 420 of the kids eight years later.

Boys who lost a greater amount of slow-wave sleep between childhood and the teen years had a higher risk of developing insulin resistance than those whose slow-wave sleep totals remained fairly stable over the years.

Insulin resistance increases the risk of developing type 2 diabetes, and is also linked to more belly fat and attention problems, the study authors noted. The investigators found no link between amounts of slow-wave sleep and these problems in girls.

"On a night following sleep deprivation, we'll have significantly more slow-wave sleep to compensate for the loss," study author Jordan Gaines, a doctoral candidate in neuroscience at Penn State University in College Park, Pa., said in a university news release.

"We also know that we lose slow-wave sleep most rapidly during early adolescence. Given the restorative role of slow-wave sleep, we weren't surprised to find that metabolic and cognitive [mental] processes were affected during this developmental period," Gaines added.

The association seen in the study does not prove a cause-and-effect relationship. More research is needed to confirm the findings and determine whether there is a link between reduced amounts of slow-wave sleep and increased risk of insulin resistance in other age groups, the researchers said.

"In the meantime, we can use these findings as a springboard for future work on the sleep-health connection. The best thing we can do for ourselves today is keep a consistent sleep schedule, so as not to deprive ourselves of any more slow-wave sleep than we're already naturally losing with age," Gaines said.

The study was scheduled for presentation Saturday at the annual meeting of the American Association for the Advancement of Science, in Washington, D.C. Research presented at meetings should be considered preliminary until it has been published in a peer-reviewed medical journal.

The U.S. National Institute of Diabetes and Digestive and Kidney Diseases has more on insulin resistance and prediabetes.