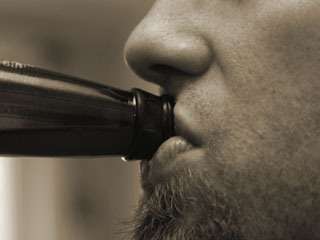 The effects of alcohol appear to be more pronounced for those with the virus that causes AIDS, even when the virus is suppressed with modern antiretroviral treatment (ART), the Yale University researchers reported.

They noted that HIV patients who have just one or two drinks a day are at greater risk for death or alcohol-related health issues.

The study involved patients treated by the U.S. Department of Veterans Affairs between 2008 and 2012. There were more than 18,000 HIV-positive patients and over 42,000 people not infected with the virus. The researchers investigated the link between drinking alcohol, death and other health issues the patients developed.

They found the patients with HIV who drank even moderate amounts of alcohol were more likely to develop alcohol-related health problems and die than those who were HIV-negative. This was true even for those with suppressed HIV, according to the study published online Feb. 2 in the journal Drug and Alcohol Dependence.

"It demonstrates that even among people on ART with suppressed viral load, who are much less sick in general, there is still an added effect of alcohol among those individuals than people without HIV," said researcher Dr. Amy Justice. She is a professor of general medicine and of public health at Yale's School of Public Health, in New Haven, Conn.

"It suggests the threshold for safe alcohol consumption is likely different for people with HIV," she said in a university news release.