Bear belly might hold clues to obesity in humans

Bear belly might hold clues to obesity in humans 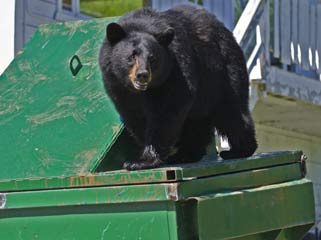 (HealthDay News) -- Changes in their gut microbes help bears prepare for hibernation, according to laboratory research that may hold clues for combating obesity in people.

As they prepare to hunker down for the winter, bears eat as much as possible, to boost their body fat. Despite the rapid weight gain, they don't suffer the health problems associated with obesity in people, Swedish researchers noted.

In winter, during hibernation, the gut microbe population is less diverse, according to the study published Feb 4 in the journal Cell Reports.

Potentially, the findings could point to new ways to manage obesity in people, said study leader Fredrik Backhed, of the University of Gothenburg.

It's too early to say for sure, "as I consider this being very basic science," he said in a journal news release. "However, if we learn more about which bacteria and the functions that promote and/or protect against obesity [in hibernating bears], we may identify new potential therapeutic targets."

In previous research, Backhed and colleagues found that the composition of gut microbe populations can affect the amount of energy gathered from food, and that these populations change in people who are obese or have type 2 diabetes.

The U.S. Centers for Disease Control and Prevention explains how to prevent weight gain.