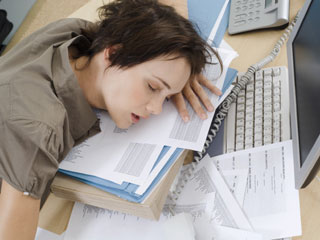 Problems such as trouble falling or staying asleep, getting less than six hours of sleep, frequent snoring, sleep apnea or rotating shift work appear to increase the risk of type 2 diabetes, the researchers said. They found that women who reported trouble falling or staying asleep all or most of the time had 45 percent greater odds of developing type 2 diabetes.

Women who had four sleep problems had more than four times the odds of developing type 2 diabetes, the researchers said.

"Women with sleeping difficulty, especially when also having other conditions, should be aware of potential higher risk of diabetes," said lead researcher Dr. Yanping Li, a research scientist at Harvard T.H. Chan School of Public Health in Boston.

"Doctors should pay more attention to the potential diabetes risk of women who have difficulty falling asleep or staying asleep," she said.

Dr. Joel Zonszein, director of the Clinical Diabetes Center at Montefiore Medical Center in New York City, emphasized that the new findings only show an association between sleep problems and type 2 diabetes, not a cause-and-effect relationship.

However, he said it's plausible that disrupted sleep could increase the risk of type 2 diabetes because sleep problems play havoc with the body's hormones.

"Not sleeping well affects the circadian rhythm regulated by hormones that are so important for metabolism and involved in control of blood sugar. Thus, it is not surprising that sleep disorders are associated with obesity and diabetes," said Zonszein, who was not part of the study.

The report was published Jan. 28 in the journal Diabetologia.

For the study, Li and her colleagues collected data on more than 133,000 U.S. women who took part in the Nurses' Health Study between 2000 and 2014. At the start of the study, none of the women had diabetes, heart disease or cancer.

Over 10 years of follow-up, more than 6,400 women developed type 2 diabetes. Women with one sleep problem had a 45 percent increased risk of developing type 2 diabetes, the researchers found.

When the researchers took into account other factors, the risk for diabetes dropped. For example, looking at women with sleep problems who weren't obese or didn't have high blood pressure or depression, the risk was 44 percent. The risk decreased to 33 percent after reviewing revised data on weight, the study said.

"People who sleep well are healthier," Zonszein said. People who are depressed, stressed by work or who are obese will likely develop more diabetes, he said.

"In our industrialized society this is common," Zonszein said. "Many people don't get a good sleep as they are watching TV, or are in front of a computer, or a smartphone screen all day and all night," he said. "We have lost our natural good sleep that consists of work during the day, evening relaxation and a good night's sleep."

Losing this pattern disturbs a normal physiological process in which certain hormones normally raise blood sugar levels before we are ready to work, he said.

"These hormones include glucagon, epinephrine, growth hormone and cortisol, which all work in tandem with insulin and play an important role in regulation of sugar, and this normal hormonal 'rhythm-icity' is lost in our society, and certainly may be a cause of diabetes and obesity," Zonszein said.