Exercise has its limits for losing weight

Exercise has its limits for losing weight 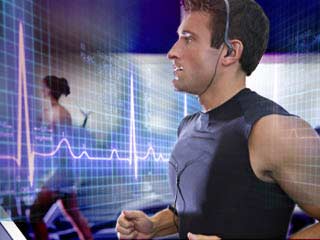 (HealthDay News) -- That daily 5-mile run may not be burning as many calories as you think, a new study suggests.

In fact, the researchers found, moderate exercise -- the equivalent of walking a couple miles per day -- may be the best way to burn extra calories. Beyond that, the body seems to adapt its metabolism so that calorie-burning plateaus, no matter how hard you work out.

The findings, published online Jan. 28 in the journal Current Biology, may sound counterintuitive -- or at least disappointing.

"The predominant view is that the more active you are, the more calories you burn every day," said lead researcher Herman Pontzer, an associate professor of anthropology at City University of New York's Hunter College.

This study, according to Pontzer, supports a different view: "It's really not a simple dose-response relationship," he said. "The body adapts to exercise, and it begins adapting at a moderate level of activity."

His team arrived at that conclusion after studying 332 adults, aged 25 to 45, from the United States, Ghana, Jamaica, Seychelles and South Africa.

All of the participants wore a device that recorded their activity levels for a week, and the researchers used standard tests to measure each person's total calorie-burning for the week.

But more intense activity brought no additional benefit -- at least as far as calories.

Pontzer stressed that exercise has many benefits for a person's health in general. "There's nothing in this study that suggests exercise is anything but good for you," he said.

But if your goal is weight loss, exercise alone is unlikely to cut it. And that message, Pontzer noted, is not new.

"We know that diet changes are the most effective way to lose weight," he said. "This study adds another piece of evidence to support that."

Two researchers who were not involved in the study agreed that exercise alone isn't enough.

"The reality is, exercise by itself is not great for weight loss," said Dr. Timothy Church, a professor of preventative medicine at Pennington Biomedical Research Center, in Baton Rouge, La.

But, he added, exercise does boost weight loss from diet changes -- and it helps people keep the pounds off.

Dr. Chip Lavie, director of exercise laboratories at the Ochsner Heart and Vascular Institute in New Orleans, made the same point.

"Also," he said, "there are numerous benefits of exercise besides just weight loss."

According to Lavie, those benefits include improved fitness (with high-intensity exercise generally getting better results), a lower risk of heart disease, stress relief -- and fun.

But why wouldn't greater amounts of exercise help the body burn more calories every day? Behavior could partly explain it, according to Pontzer: When people exert themselves at the gym or on a run, they might compensate by sitting or lying down more throughout the rest of the day.

But Pontzer thinks there is also a physiological adaptation. In an earlier study, he and his colleagues focused on the Hadza, a traditional hunter-gatherer population in Tanzania. The Hadza are highly active every day, Pontzer said -- walking long distances and performing hard physical labor.

And yet, his team found, the average Hadza adult burns a similar number of calories each day as the typical American.

In the new study, there was a point at which the daily calorie burn from exercise leveled off. Pontzer described it as the equivalent of walking a couple miles per day.

But, Church pointed out, there appeared to be relatively few study participants who got much more exercise than that. And that makes it harder to draw firm conclusions.

Plus, he said, the typical American falls far short of the "line" where calorie-burning plateaued in this study.

"I question how much this would mean to the average American trying to lose weight," Church said. "Physical activity is going to add to calorie expenditure for the vast majority of them."

The U.S. Centers for Disease Control and prevention has more on exercise and health.