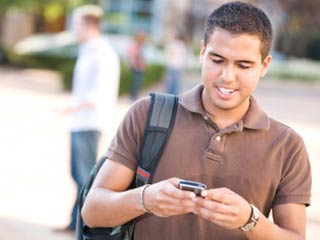 The main culprit is texting. Almost nine out of 10 reported that texting was their main digital diversion while in class. About three-quarters said they emailed or checked the time on their devices. Seventy percent reported checking in on social media (for example, Facebook), while 40 percent surfed the web. One in 10 spent time in class playing games on their devices.

"Most of us love technology," said study author Barney McCoy, an associate professor in the College of Journalism and Mass Communications at the University of Nebraska-Lincoln. "And we want it to benefit us. But technology also affords a view that can be distracting.

"So the question now is, how do we balance this out?" he added. "How can we take in all the constructive dynamic benefits that this technology enables us to have, and then also be disciplined enough to recognize that there is a time and place to put it aside, and pay attention and stay focused?"

McCoy and his colleagues reported their findings in the January issue of the Journal of Media Education.

The researchers polled 675 students attending colleges and universities across 26 states during 2015. They polled undergraduate and graduate students majoring in mass communications, marketing, business, law, education and agriculture. About one-third were male and two-thirds were female. They ranged in age from 18 to 22.

Most students -- between 80 and 90 percent -- acknowledged that such behavior might distract from studying. More than one-quarter said it threatened to diminish academic performance.

Yet, a majority argued against penalties for non-academic use in class, the survey found. Nearly one in three students said the practice had no negative impact on their studies.

Nearly three-quarters said their instructors already had some form of restrictive digital policy in place, but more than one-quarter said they should be able to use their devices at will. About one in 10 said they wouldn't be able to stop even if they wanted to, the survey found.

Compared with a 2013 survey, the new poll shows a slight uptick in the regularity with which students are using their devices in class. For example, while just 30 percent said they checked their device a minimum of 10 times a day back in 2013, that figure rose to 33 percent by 2015, the study authors said.

In 2013, about 8 percent of students said they never used their devices for non-educational purposes in class. By 2015, that figure dropped to just 3 percent, according to the researchers.

Scott Campbell, an associate professor of communication studies at the University of Michigan, Ann Arbor, expressed little surprise at the findings.

"Young people turn to digital media as an immediate way to relieve boredom and, sadly, the classroom is one of the environments in which they most commonly experience boredom," he said. "Also, young people feel naked when they are cut off from their peer networks.

"Expectations for being accessible to others, and for having access to digital content, are very high these days. We may not always be thinking about it consciously, but it's there underneath the surface. The need to stay connected," Campbell added.

As a result, he said, many people are "glued to their mobile and portable devices without even being fully aware of it. This helps explain why people use their digital media in problematic ways, such as during class or while driving, when they know it's harmful," he pointed out.

Still, Campbell cautioned that the study relied on self-reported recollection of digital use, which is not always reliable. And, the ultimate impact on academic performance is not entirely clear.

"I have seen studies that show lower grades as a result of digital distraction, and other studies where there is no significant effect on grades," he said. The bottom-line will likely depend on a number of overlapping factors, such as the size and nature of the class, individual student differences, and exactly how the technology is used, he suggested.

Read about how some teachers are using smartphones as tools from the National Education Association.