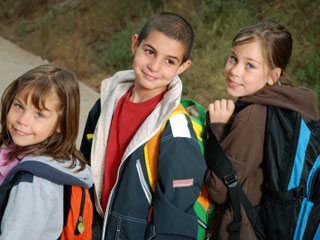 (HealthDay News) -- Parents who worry that too much sitting might harm their children's health may have a new ally: "standing desks" in the classroom.

A new research review reports that use of the desks at school helped kids get more active.

The researchers also found that standing desk use was tentatively linked to better classroom behavior and greater energy expenditure among children, although the results were mixed -- stemming from varied studies.

"There's a lot of research out there about integrating standing desks into the workplace that generally found favorable impacts on reduced sitting time and increasing standing time," said study author Karl Minges, a doctoral candidate at the Yale School of Nursing in Orange, Conn.

"In the student population ... it seemed to be a natural fit," said Minges. "Our research adds to that evidence, showing schools can be a good place to introduce interventions to improve students' health as well as their minds."

The review was published online Jan. 22 in the journal Pediatrics.

Minges and his colleagues reviewed eight international studies. The studies included schoolchildren aged 5 to 18. Desk designs included both adjustable sit-to-stand desks, which permitted the use of a stool, and standing desks, which didn't have a stool.

While the eight study designs varied greatly, half showed that sitting time among students using the standing desks decreased about one hour each day. Two studies showed a significant increase -- up to nearly 31 percent -- in the proportion of time children spent standing each school day.

Decreasing sedentary time among children is a widespread goal for health promotion and obesity prevention efforts in children and adolescents, the study authors said.

In the United States, obesity rates among children aged 6 to 11 grew from 7 percent in 1980 to nearly 18 percent in 2012. In Americans aged 12 to 19, obesity rates increased from 5 percent to 21 percent in the same time period, according to the U.S. Centers for Disease Control and Prevention.

"It shows promise, but it's too early to say that this type of intervention would have a major public health impact," said Dr. David Paul, chair of pediatrics at Christiana Care Health System in Wilmington, Del.

"It's a compelling idea and a compelling intervention," Paul said. "But we're going to have to wait until larger studies are undertaken to see if there's an impact on decreasing obesity and type 2 diabetes, the things we'd want to see."

James Sallis is a professor of family medicine and public health, and director of active living research at the University of California, San Diego. Sallis said he hopes the research will spur school officials to invest in some standing desks and observe how students respond.

"This really seems like it could be an affordable intervention that could have real benefits for children, so I'd encourage schools to at least try it out," said Sallis.

Let's Move has more ideas on increasing activity in children.